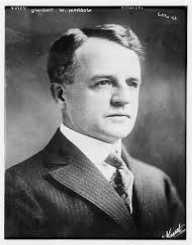 Dwight Whitney Morrow was born on January 11, 1873, in Huntington in West Virginia. In 1875, he moved to the state of Pennsylvania with his parents. His father James Elmore Morrow worked as the principal of Marshall University, then still a college.

Dwight Morrow went to Amherst College and graduated in 1895. Among his classmates in the college was Calvin Coolidge, who later became president of the US. He proceeded to Columbia University’s School of Law in 1896. Morrow graduated from law school in 1899.

He began his legal practice at the Reed, Simpson, Thatcher and Bartlett law firm in New York. In 1905 he became a bonafide partner in the firm. He stayed at the firm until 1913. In 1914, Morrow joined the commercial and investment bank J.P. Morgan & Company. He became a member of the board of directors in the bank and other investment partners.

As an influential director at Morgan, Dwight Whitney Morrow secured substantial financial loans to US allies in WW1. In return, the allied nations like Britain and France bought military equipment for the war from US companies.

He created conducive transportation logistics for the delivery of the military wares to Europe. After the war, Morrow was nominated to serve on numerous security and the army committees by the US President and former classmate Calvin Coolidge.

Dwight Morrow used his goodwill with the president to recommend the establishment of various national security organs within the military. One such achievement was the creation of the US Army Air Corps department. He succeeded in pushing for the creation in 1926 while serving on the military and civilian aviation board.

Having delivered favorable results on earlier assignments, Dwight Whitney Morrow got another monumental appointment. President Coolidge appointed him to be the US ambassador to Mexico in 1927. Morrow got the appointment when relations between the two neighbors were sour. Mexico had supported clandestine incursions to sabotage the oil industry and other establishments in the US.

Dwight Morrow was assigned to better sour relations. His first duty was to change the outward image of the US in the skeptical Mexican press. He changed the display sign at the embassy from the American Embassy to read The United States Embassy. His action endeared him to a section of Latin American leaders who saw the monopolization of the term America by the US as subjugation.

Unlike his predecessors, Morrow changed his approach to mutual respect and friendly diplomacy. He became active in local activities. He sponsored several beautification activities in the town of Cuernavaca. Morrow engaged the locals in most cities he visited to understand their perception of the US perceived aggression towards Mexico.

He then turned to the political elite. He engaged the Mexican President Elias Calles on various issues over the numerous breakfast meetings they had. Morrow accompanied the president and other high ranking Mexican officials on their regular administrative tours.

Dwight Whitney Morrow convinced the Mexican president to help secure the common border from the sabotaging incursion on US soil. When President Elias Calles agreed to his proposal, Morrow reciprocated with sound financial advice and support. He secured financial help to from US institutions to Mexican projects.

His second significant achievement was the mediation between the government and the influential Roman Catholic Church. In 1917, the Mexican government adopted a new constitution that inhibited the church from addressing political matters in the country. For a while, the simmering tension threatened to turn into a fully-fledged civil war. President Coolidge feared the instability in Mexico would drive an influx of refugees northward, hurting the US economy.

When the sporadic armed conflicts between the Catholic faithful and the Mexican forces flared, Morrow offered to mediate. He got the opportunity owing to the goodwill he had created within the Mexican citizenry. He enlisted the help of the US Catholic clergy and The Holy See. Morrow got the two parties to agree to a truce while attending negotiations.

When the Mexican President Emilio Gil came into power in September 1928, Dwight Whitney Morrow seized the opportunity to address the issue. On June 21, 1929, the Mexican government and the Catholic Church agreed to a permanent agreement mediated by Morrow. The Catholic Church was given the freedom to operate and criticize the government within the legal framework. Dwight Morrow helped the Mexicans avoid a civil war by stopping the Cristero Revolution.

Dwight Whitney Morrow returned home after his term expired in 1930. He became the New Jersey Senator the same year. He served in the National Senate until his death. He carried on with his liberal views within the Republican Party. Through a bipartisan approach, he managed to attract development partners to New Jersey.

Dwight Morrow died in New Jersey on October 5, 1931, and was buried at the Brookside Cemetery. In his final will, he donated huge sums of money to several institutions. The New Jersey State founded the Dwight Morrow High School in his honor in 1932.

His success in diplomatic efforts was characterized by reason and mutual understanding. Morrow relied on understanding the views of the opposing side before responding with a counter opinion. With his somewhat unorthodox diplomatic maneuvers, Morrow achieved much in Mexico than expected. The US and Mexico became peaceful neighbors going forward.