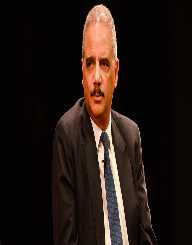 Eric Himpton Holder Jr. was born 21st January 1951, to Eric and Miriam Holder. He was born in The Bronx, New York, in the United States, but he grew up in Queens. Eric Holder studied at Stuyvesant High School in Manhattan and graduated in 1969. He then attended Columbia University and graduated in 1973 with a Bachelor of Arts Degree in American History.

Eric Holder then went to Columbia Law School to study, and he graduated in 1976 with his Doctor of Jurisprudence Degree. During his first summer break, he worked for the NAACP Legal Defense and Educational Fund, and his second summer was spent with the United States Attorney.

Fresh out of law school in 1976, Eric Himpton Holder joined the U.S. Department of Justice. They had a new Public Integrity Section, and Holder worked there until 1988. In 1988, Eric Holder was selected by President Ronald Reagan to be appointed as a judge of the Superior Court of the District of Columbia. Eric Holder held the position until 1993.

In 2001, Eric Holder entered private practice as an attorney at Covington & Burling, based in Washington, D.C. One of his clients was the National Football League. In 2004, Eric Holder assisted with brokering a deal for Chiquita Brands International with the Justice Department. Chiquita had made a payment to the United Self-Defense Forces of Columbia, which was on the U.S. government’s list of foreign terrorist organizations. Chiquita’s representatives pleaded guilty, and a fine of $25 million was paid. A civil suit followed, and it was then that Holder represented Chiquita.

On 1st December 2008, Obama announced he would be nominating Holder for the position of Attorney General of the United States. In January 2009, Eric Holder was officially nominated, and after a landslide approval by the Senate Judiciary Committee, was formally confirmed into the position on 2nd February 2009.

Attorney General Of The United States

Eric Himpton Holder was a great believer in the legal right of the President to prosecute the War on Terror. He successfully testified in May 2011 for the operation of U.S. special forces that killed Osama bin Laden. He also sccessfully defended the legality of drone strikes being used against terrorists. Another major legacy of Holder’s tenure was to move terrorism cases to civilian federal courts to be tried. Through Holder’s persistence, the Department of Justice was successful in trying many cases and having terrorists prosecuted; many put in prison for life.

Eric Holder worked on several other key areas while he was Attorney General. One of these was in relation to voting rights and redistricting. Redistricting is where states or areas within them re-zone districts which could potentially be discriminatory to minority groups who are not represented properly. Eric Holder saw this a violation of Section 5 of the Voting Rights Act of 1965. He was initially successful in suing Shelby County in Alabama, for such an act, but upon appeal to the Supreme Court, the appeal was upheld. This led the way for over a dozen states to try and change their voter identification laws. Texas, in particular, came under fire from Eric Himpton Holder for their redistricting laws against Hispanics.

Another key area for Holder was to support same-sex marriage. In early 2011, he announced the Department of Justice would no longer defend cases in relation to the Defense of Marriage Act. He said laws had changed considerably in the previous 15 years in relation to homosexuality. In January 2011, 127 members of the Mafia were arrested by the FBI in New York City and New Jersey. It included members from all five Families in New York, and one form New Jersey. It was the largest one-day operation in the history of the U.S. against the Mafia, and Holder was very quick to do the press conference. Eric Holder came out in opposition to the Guantanamo Bay detention camp. He established a task force to look at the inmates and whether they might be able to be relocated elsewhere. He also stated that he believed the interrogation technique is known as “waterboarding” was torture.

The U.S. government filed a law suit against the Swiss bank, UBS AG. They are accused of conspiracy in U.S. tax fraud. As Holder represented the bank when he was in private practice, he recused himself from all legal matters in relation to the bank. Eric Holder’s predecessor had filed a civil suit against the New Black Panther Party, who allegedly caused voter intimidation at the 2008 elections. Members of the party stood outside a polling station in paramilitary uniforms, and one carried a nightstick.

Under Eric Himpton Holder, the Department dropped the charges. Rumors abounded that the Department of Justice under Holder, wouldn’t prosecute minority groups for civil rights violations. Another controversial case was Operation Fast and Furious in 2011. The Operation related to over 2,000 firearms being smuggled to Mexican drug gangs. The Operation failed, and government coverup was alleged. Eric Holder had sworn under oath that he wasn’t aware of the Operation until 2011.

The House Oversight Committee Chairman, Darrell Issa, announced in April 2012 that his committee was preparing a Contempt of Congress resolution against Eric Holder. Eric Holder met with Issa in June 2012, and offered to provide the documents that had been requested, but only if assurances were given that it would resolve the dispute. Issa rejected the offer.

In June 2012, the Committee voted to hold Holder in contempt of Congress. Due to his previous dealings with the National Rifle Association, (NRA), the NRA announced they would be joining the contempt vote against Holder.

Eric Holder was held to be in both criminal contempt and civil contempt. Although Eric Holder was under extreme pressure to resign, President Obama cited “executive privilege” for not having Holder prosecuted. After investigation, Holder was found to have no case to answer.

On 14th November 2013, Representative Pete Olson, with 19 other Republicans, introduced a resolution proposing Articles of Impeachment against Holder. They cited his refusal to defend the Defense of Marriage Act in court, his alleged role in Operation Fast and Furious, and failing to prosecute anyone involved in the IRS targeting of groups. There were other reasons cited also.

In 2015, Eric Holder took up a position back at Covington & Burling.

While he was Attorney General, Eric Holder had refused to prosecute any of the large banks for their roles in the financial crisis. Many of these banks were clients of Eric Holder in private practice.

2008:   Named as one of The 50 Most Influential Minority Lawyers in America by National Law Journal

Eric Holder married Sharon Malone in 1990. Holder and Malone, an obstetrician, have three children together – to daughters named Brooke and Maya, and a son name Eric.