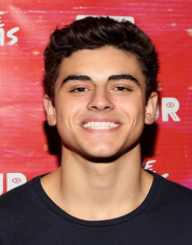 American Internet Personality Hayes Grier was born on 8 June 2000 in North Carolina, New York, United States of America. His full name is Benjamin Hayes Grier. He is the son of a football coach Chad Grier and Elizabeth Floyd. Hayes has two elder brothers named Will and Nash and a younger half-sister named Skylynn. Will Grier is a professional football player and the quarterback for West Virginia University while Nash Grier is another popular Internet star. His younger half-sister Skylynn is the daughter of his mother Elizabeth and her current husband, John Floyd. She has appeared in many videos posted by Nash and Hayes.

Hayes Grier grew up in North Carolina and has completed his formal education from the Davidson Day School. He is highly enthusiastic about sports and loves to play football and lacrosse. Just like his brother Will, Hayes is also the quarterback for his school team.

Nash Grier became an Internet sensation by posting hilarious videos on the popular video-sharing site Vine. Following the footsteps of his star brother, Hayes Grier also began posting videos, and within a very short span of time, he managed to become an internet sensation. His videos gained immense popularity, and a stream of followers started subscribing to his channel. Hayes’s stardom was not just restricted to Vine.

Hayes Grier started reaching out to people all over the world through other social networking channels like Twitter, Instagram, Facebook, Snapchat, and Youtube. His popularity grew by leaps and bounds, and on an average, Hayes gained over 100,000 followers every week on his social media accounts. The Grier Brothers’ big moment came when fellow Vine sensation Tiffiny Semashko retweeted one of their videos.

Hayes Grier does not shy away from showcasing his talent in various mediums of entertainment. He has also appeared on television and has inked a deal with a publishing house too. Hayes was the youngest star to have participated in the popular dance reality show ‘Dancing with the Stars.’ He partnered with choreographer Emma Slater for the 21st season of Dancing with the Stars and competed on the show for seven weeks finally finishing at the 8th position.

Soon after the completion of the show, Hayes Grier was signed up by a publishing house and shortly after that; he released his first novel ‘Hollywood Days with Hayes’ in November 2016. He was also seen in the show ‘Freakish’ that aired on Hulu TV. Hayes also has his reality show titled ‘Top Grier’ which is aired on the app go90. The charismatic blue-eyed boy is known for his impeccable sense of fashion. He had collaborated with his brother Nash and friend Cameron Dallas to launch a clothing line through Aeropostale in 2014.

Till date, the 16-year-old has managed his stardom like a pro. The multi-talented personality is known for his determined attitude. Hayes Grier understands the value of his fans pretty well and bonds well with all his fans. Hayes loves to visit amusement parks and jet skiing as he is fond of adventures. He also enjoys snowboarding and possesses a red penny board. He is also an avid reader. He has a pet dog named Zan.

Some of Hayes Grier's videos were termed racist, and this is the only controversy faced by Hayes. Following the debate, he and his brother started using the hashtag ‘#notaracist’ while posting their videos keeping in mind the sentiments of their viewers. In 2016, Hayes was involved in a dirt bike accident and had to spend two days recovering in a hospital. The Internet sensation is currently single and has never dated anyone publically.