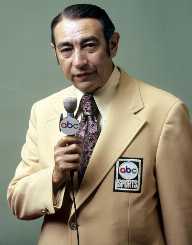 Howard Cosell was born on March 25, 1918, in Winston-Salem, North Carolina, USA. His parents were Nellie and Isidore Cohen. Later in life, Howard began going by the name Howard Cosell, which is the name he is best known for now.

After earning his law degree, Howard Cosell left New York to serve in the United States military during World War II. He stayed in the army until the end of the war. During this time, Cosell rose to the rank of major.

Howard Cosell had earned fame from his sports broadcasting in the 1950’s, and by the time the 1960’s came around, he had decided to become even more involved in sports. In 1961, he began working as a sports journalist. He also appeared a guest radio star on several radio stations around the United States. It was also around this time that he began working for WABC-TV as a sports newscaster.

In the 1980’s, Howard Cosell continued to comment on sports games for ABC. During one of the games he was commenting on, in 1980, Howard Cosell had to announce John Lennon’s death during the middle of a game. During the 1980’s, he was best known for his commentary on boxing matches. In 1984, he retired from Monday Night Football. He later left television to return to sports broadcasting on the radio.

Near the end of his career, Howard Cosell began writing books, most of them autobiographical in nature. He wrote some of his books on his own and wrote others with other authors. Some of his most famous books are listed below.

Howard Cosell married Mary Abrams in 1944. The couple had two children together: Hilary and Jill Cosell. The marriage ended with Abrams death. He did not remarry.

Howard Cosell died on April 23, 1995. His cause of death was a cardiac embolism. He was 77 years old when he passed away.