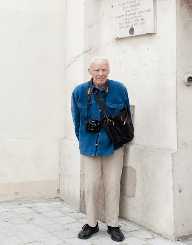 New York photographer Bill Cunningham was born on the 13 March 1929 in Boston. His family was of Irish-Catholic descent, and he was one of four children.

Bill Cunningham worked as at Bonwit Teller Boston store where he became familiar with fashion. He later went out on his own as a milliner, calling his business William J. After a stint in the U.S. Army during the Korean War he continued with his millinery business and also worked for Chez Ninon for awhile. Clients included Katharine Hepburn, Marilyn Monroe, and Jacqueline Bouvier Kennedy. He began writing fashion columns for Women’s Wear Daily and the Chicago Tribune, and in 1962 he shut his millinery business down.

Bill Cunningham was a student at Harvard University but did not graduate.

After years of working as a milliner and fashion writer, Cunningham got involved in fashion photography including shooting random shots of people on the streets of New York City specializing in fashion. Working for the Times, his columns Evening Hours and On the Street ran from the late 1980s until 2016.

From 1968 until 1976 Cunningham curated a series of vintage fashion photographs using garments from thrift shops and street markets. He published a book. Facades, in 1978 which documented some of the pictures from the collection.

Bill Cunningham preferred to focus on original style rather than stylised celebrities although he was one of the first to photograph famous people on the streets of New York City without their permission. This was the case with a famous photograph of Greta Garbo in 1978 which brought his work to national attention.

The Council of Fashion Designers of America awarded Cunningham as the Outstanding Photographer of the Year in 1983. Then in 2008, the French government awarded him their Legion of Honor.New York City designated him a living landmark in 2009. Bill Cunningham was a great sight cycling through the streets in his trademark outfit of a blue jacket, khaki pants and black sneakers with his 35-millimeter camera around his neck. Filmmaker Richard Press made a documentary about Cunningham (2011). In 2012 he was awarded the Carnegie Hall Medal of Excellence. After his death in 2016, the department store Bergdorf Goodman celebrated Cunningham’s life with a life-size mannequin of him in their window. New York City council announced in July 2016 that the intersection at the corner of 57th and 5th Ave would be changed to Bill Cunningham Corner and a new street sign was installed in his honor.

Bill Cunningham had a stroke on the 25 June 2016 and died in New York City.