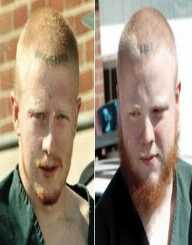 Bryan Freeman is one of the two Freeman brothers convicted for killing their parents in Lehigh, Pennsylvania, USA.

Bryan Freeman was born in 1978 to Dennis and Brenda Freeman. He was the eldest son in the family of three sons. The other sons were David and Erik. David was a year younger than Bryan. He grew up in Lehigh, Pennsylvania. His parents were strict adherents to the Jehovah Witness denomination of the Christian faith. With his brother David, Bryan often rebelled against the stringent upbringing style by their parents. Despite being rebellious at home, Bryan was a good student in his class and teachers.

Notwithstanding his great character in school, Bryan Freeman had terrible experiences in his formative years. He became inclined to the Nazi philosophy in the early years of their youth. He became involved in gang-related groups. He experimented with narcotics and even publicly tattooed himself symbols of Nazi allegiance on his head. As a consequence, he was taken for rehabilitation centers severally.

Together with his brother David and their cousin Ben Birdwell, Bryan became a member of the skinhead formation called Berzeker. The three young men became more violent. They often threatened their parents and other relations with untold violence.

On February 26, 1995, Dennis Freeman, his wife Brenda and their youngest son Erik were murdered in their home in Lehigh County. The next day, Valerie Freeman found their bodies were found stabbed and bludgeoned with a blunt object. Due to their history, the three young men became the prime suspects in the murders.

The police tracked and arrested them in Michigan State in the home of another skinhead colleague on March 1, 1995. On December 7, 1995, Bryan admitted he killed his mother. Eight days later, on December 15, David confessed to killing his father. Bryan and David were found guilty of killing their parents. They were both sentenced to life in jail without any option of parole.

The trial of Ben Birdwell continued in front of a selected jury. On July 18, 1996, the jury found him guilty of being an accomplice to the murder of Dennis Freeman. Ben Birdwell was convicted of abetting the killing of Dennis Freeman and sentenced to a lifetime in jail without parole. Neither of the three was found guilty of killing young Erik Freeman, aged 11 at the time of his death.

On February 28, 2015, the two brothers spoke about the details of the murder for the first time. They narrated the events of the material day in pinpoint detail. On February 26, 1995, Bryan accosted his mother in the hallway of their house. He grabbed his mother, blocked her mouth with a pair of shorts. He repeatedly stabbed her to death.

David and his cousin Birdwell went to his father’s bedroom upstairs. They found Dennis Freeman asleep. David had an aluminum baseball bat, while Birdwell had a metal exercise bar. They beat Freeman to death with blows to the head. Birdwell then went to another room and found Erik sleeping. He hit him on the head severally using an ax handle, killing him in his sleep.

After narrating the details of their crime, the two brothers explained their remorse to their maternal aunt, Sandy Lettich. Bryan embraced the Jehovah Witness faith and got baptized in prison. David has been slowly transforming into a believing Christian.

The killings of the Freemans sparked one of the worst murderous sprees in Lehigh County. On February 27, 1995, just a day after the Freemans were killed, the Howorths were murdered. Jeffrey Howorth went into their house and picked his father’s hunting rifle. He waylaid his parents as they came back from a family visit. He fired at his parents and killed them. George and Susan Howorth became the second parents to be killed by a skinhead son in Lehigh County.

He was arrested on March 4, 1995. Howorth allegedly got inspired by Bryan and David Freeman. He was tried in acquitted by the jury. Howorth was freed after the jury found him unfit on insanity grounds. After a while, he was forcibly taken to a mental hospital under state supervision. Fourteen similar murders by skinheads of the Neo-Nazi formations happened in Lehigh County from February to June 1995.

As the killings continued, parents in Lehigh County became more worried for their safety. They accused the authorities of delaying in helping the reforming the wayward children. The Pennsylvania Human Relations Commission accused the parents of negating on their roles in instilling proper morals in their children.

Eventually, they reached a compromise. They formed a joint observation formation to monitor the activities of the skinhead movements. Schools started watching any peculiar change of character in any of its students.

The skinheads showed unruly behaviors and telltale signs of violence in school. Teachers became concerned after their students committed crimes against their families. The vigil monitoring of activities bore fruits. Mark Thomas was arrested in a foiled bank robbery. He was the leader of the white supremacist group Aryan Republican Army.