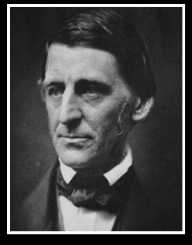 American philosopher, poet, and essayist Ralph Waldo Emerson was born on the 25 May 1803 in Boston, Massachusetts.

Ralph Waldo Emerson was a pupil at the Boston Latin School. At fourteen years of age, Emerson enrolled at Harvard College where he studied the classics, mathematics, and religion (1821). He later studied at the Harvard Divinity School.

Initially, after graduation, Ralph Waldo Emerson worked as a teacher before returning to Harvard to study theology. In 1826, he started his Unitarian ministry. He joined Boston’s Second Church and was soon appointed as the senior pastor. He was also appointed a chaplain to the Massachusetts Senate and became a member of the Boston School Committee.

Ralph Waldo Emerson then left the United States and traveled to Europe where he met with the poet William Wordsworth, Scottish philosopher and essayist Thomas Carlyle and others. It was around this time that he was formulating his ideas relating to transcendentalism. Upon his return to Concord, Massachusetts, he started giving public lectures to support himself.

In his public lectures, Ralph Waldo Emerson preached positivity, anti-materialism, and anti-slavery. He was pro-American and encouraged a national culture specifically American art and music.

Ralph Waldo Emerson published Nature in 1836 laying out his philosophy, and this publication marked the beginning of the Transcendentalist movement in New England. Others involved included Bronson Alcott (father of the writer Louisa Alcott), Theodore Parker, W.E. Canning, Henry David Thoreau and Margaret Fuller. This movement, which grew out of Unitarianism and was influenced by German and British Romanticism espoused by Samuel Taylor Coleridge. Ralph Waldo Emerson was the editor of the Dial (1842-1844), the mouthpiece of the transcendentalists as well as their chief spokesperson.

During the following decades, Ralph Waldo Emerson was influenced by Eastern religion and philosophy as he moved towards a belief in spiritual impersonality. He was reading Indian, Chinese and Persian texts within his group.

He wrote the poem Song of the Soul in 1856. The Atlantic published it in 1857 as Brahma. In the early 1870s, Emerson traveled to Europe and Egypt where he saw the Pyramids and the Nile.

Some American writers such as Herman Melville and Nathaniel Hawthorne and found his denial of evil naive and questioned his thinking.

Ralph Waldo Emerson married Ellen Tucker, and in 1831 she died of tuberculosis. Later he met Lydia Jackson, and they got married in 1835. Emerson had four children with his second wife.

Ralph Waldo Emerson was anti-slavery as well as a Republican for voted for Abraham Lincoln.

Ralph Waldo Emerson died on the 27 April 1882 in Concord, Massachusetts.