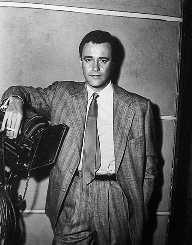 Jack Lemmon was an actor, focusing on comedy and drama.

John Uhler "Jack" Lemmon III was born on February 8, 1925, in Newton, Massachusetts, a suburb of Boston. His parents were Mildred Burgess LaRue (née Noel) and John Uhler Lemmon, Jr., and he was the only child. John Lemmon III was born in an elevator in the Newton-Wellesley Hospital. His paternal grandmother was Irish, while his family is mainly English.

Jack Lemmon attended Ward Elementary, and then Rivers Country Day School. He attended Phillips Andover Academy for high school. He enrolled at Harvard University in 1943 and lived in Eliot House. He got involved in the theater and was an active member of several acting or drama clubs, including Hasty Pudding Club, known for its musical comedy performances.

During University days, Jack Lemmon became a member of the V-12 Navy College Training Program; he took a break from studies when he was commissioned by the United States Navy. He served as an ensign on an aircraft carrier during World War II, After he completed his service, he continued his studies and graduated in 1947. He learned to play the piano on his own during his teens, and Jack Lemmon could also play the harmonica, organ, guitar and double bass. He studied acting under Uta Hagen.

Jack Lemmon was a Catholic.

After graduation, Jack Lemmon borrowed money from his father and went to New York City, where he landed his first job playing piano in a beer hall. Jack started to fall roles on the radio, off and on Broadway, on television such as The Philco-Goodyear Television Playhouse and Robert Montgomery Presents.

In 1953, Jack Lemmon’s first Broadway debut in Room Service, but only lasted a few shows. He was a plasterer in The Lady Takes a Sailor in 1947, but he was mostly unnoticed. He landed his big break in George Cukor's It Should Happen to You with Judy Holliday.

In 1955, Jack Lemmon gained fame playing Ensign Pulver in war drama Mister Roberts; he was acting alongside Henry Fonda and James Cagney. He later served in much more comedy and drama. He proved that he is an intense actor with a dramatic performance in The Days of Wine and Roses in 1962. After that, he was sometimes referred to as “America’s Everyman.”

Jack Lemmon’s versatility and ability to make the audience identify and relate to his character makes him shine on the big screen. He was a favorite actor of director Billy Wilder, who would often cast him on films. From 1966, Jack Lemmon partnered with fellow comedian Walter Matthau, starting with The Fortune Cookie. He is well known for playing working class person who is trying to get ahead, but down on their luck.  Out of the seven films, he acted under the direction of Billy Wilder; five was with Walter Matthau.

In total, he has more than sixty film and television titles under his belt. His last stint was as the narrator for The Legend of Bagger Vance in 2000.

Aside from acting, he had a producing company, Jalem. Jack Lemmon directed Kotch, starring friend Walter Matthau. Other films include Cold Hand Luke, The Slow Guillotine and then some more.

He had musical albums: A Twist of Lemmon in 1958, and Some Like It Hot in 1959.Jack Lemmon Plays Piano Selections from Irma La Douce was a piano recorded that was released in 1963. Jack Lemmon’s first singing soundtrack was in Three for the Show and My Sister Eileen. He had also composed two theme songs for films Fire Down Below and Tribute. Jack had released six musical records.

Jack Lemmon was not active in politics but supported Democrats Senator Eugene McCarthy.

Jack Lemmon married first wife Cynthia Stone in 1950; their first child Chris was born in 1954. They were divorced in 1956. He then married Felicia Farr in 1962, and daughter Courtney was born 1966. He also has a stepdaughter name, Denise.

In 1998, he admitted to being an alcoholic since 1976 and gave up alcohol in the early 1980s. He also cut back on cigarettes, switching to cigars, and pipe smoking. He was also a hobby golfer. In the annual Bing Crosby National golf competition, Lemmon's fans would root him on in his quest to pass to round 4; he never achieved this goal.

In 2001, Jack Lemmon passed away of metastatic bladder cancer, which he had been fighting for two years. He was buried near Walter Matthau, who died a year before, in  Westwood Village Memorial Park Cemetery in Westwood, California.

Jack Lemmon won 51 awards in his lifetime of being an actor. And he was especially proud of the American Film Institute lifetime achievement award 1988, and the honorary golden bear from the Berlin international film festival in 1996. Jack also had two Oscars to his name.