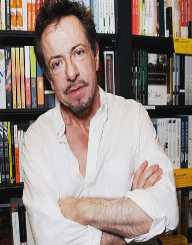 One field was never really enough for his imagination. Flitting between novelist, painter, screenwriter, director, playwright and even comic book contributor, Clive Barker remains is known for his work in the horror genre in all of these different media.

Clive Barker was born in Liverpool,Merseyside,on 5 October 1952. His mother, a painter, may have been in part the spur that led him into the creative field later on in life. His father, meanwhile, worked for an industrial firm.

As a student at the University of Liverpool in his town, the young Clive Barker studied Philosophy and English. The former, on a careful reading of his fiction, was apparent in his writing later on. Barker never wrote 'dumb fiction,' or what readers of a literary persuasion willingly discard as "only genre fiction." A genre fiction writer through and through, Barker, however, wrote smartly, very aware of what he wanted to say, and full of strong opinions on the world around him.

Clive Barker never just wrote about monsters and ghosts, as weaker writers have, but also about the people who ran into them. It would be this style which brought him to the height of success as a novelist and short story writer later in life.

It all started with the Books of Blood, sets of short horror stories written by Barker over the early 1980s. The stories were published in six large collections, which readers took to immediately. Barker's stories were clever in how they mixed in every day with the supernatural - in the time they were published, they filled a niche for readers which no one else had thought to fill (or at least, not successfully). One of the stories, 'The Midnight Meat Train,' was even made into a 2008 feature film starring Bradley Cooper.

As the Books of Blood went into circulation, the praise started to pour in. Another giant of the horror fiction genre, Stephen King, went as far as to call the young Barker "the future of horror" after the publication of the Books of Blood. Like King, Barker's stories were not set in entirely different worlds as some fantasies are, but rather look at normal people dealing with horrific supernatural events.

Clive Barker had a lot to live up to with King's "future of horror" statement. Under that kind of pressure, he would not have been the first writer to fall by the wayside and fade into obscurity after initial success. This was not to be, however. Barker went on to not only write more extensively in the horror genre (later expanding into dark fantasy in books like Weaveworld) but actually widened his scope and went beyond fiction as well.

The fascination with horror, however, never ceased to be at the center of Barker's career. In all of his forays elsewhere, whether the visual (Barker's paintings have been exhibited in galleries throughout the world) or the audiovisual (in his work, for instance, on the film Hellraiser, based on one of his novels) Clive Barker stuck to what he knew best.

Of all of his creations, one of Barker's visions has thrilled audiences more than any other - Pinhead, an (at first) minor character in one of his works which took on a life of his own. The creature, with a human body and spikes sticking out from its head, became one of the most recognizable tropes in modern horror cinema. The creature's success took Barker by surprise - a fitting parallel, perhaps, to the way his work has surprised audiences across the world.

The Man Behind The Monsters

Barker's monsters are monstrous in the real sense of the word. His creations continue to haunt the world in various media, from Pinhead to armies of disembodied hands and entire cities of the blind. It might sound surprising, then, that Barker himself is not much of a monster at all.

Ever eloquent and friendly, Barker's character has only added to his appeal as a celebrity author (painter, director, etc.). He has remained the strongly opinionated commentator on culture and social issues throughout his life - openly gay for more than twenty years, he was also one of the first horror writers to introduce gay characters into his work.

His politics, meanwhile, is not easy to pin down. While Clive Barker is a social liberal, for instance, he has shied away from identifying with partisan politics in his home country or abroad. What he has preferred instead is to explore the world through the funhouse mirror of horror, held up against reality. It is to this approach, as much as anything else, that he owes his following.

This is not a story without its speed bumps. In 2012, Clive Barker- following a routine visit to the dentist which introduced toxins into his blood - underwent shock and went into a coma. By his admission, the author, still young, was not expected to make it out of the trauma alive. Despite this Barker fought through the illness, nightmarish as anything in his work, and came out the stronger for it by making a full recovery.

The experience, at a stage in his career, when he was long established as one of the titans of the horror genre, gave him a lot to reflect on. In a tweet, he said the ordeal had made him reflect and see clearer. The experience far from stopped him, however, as he continues to produce work in his typical work ethic.

Having established himself so solidly, what could the future hold for Clive Barker? He has said that the idea of being a TV celebrity doesn't appeal to him particularly - nor is he likely to settle into a comfortable retirement and lounge in his success without working. More likely, then, that Clive Barker will continue to write, paint and direct as long as he can, delighting and thrilling the world with some of the most creative horrors ever.