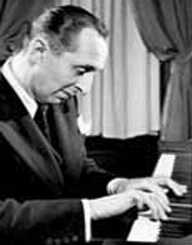 Vladimir Horowitz was a Russian-born American classical pianist and composer. Born on October 1, 1903, he is regarded as one of the greatest pianists of all time. Receiving his early piano lessons from his mother, and later at the Kiev Conservatory, he gained popularity in his first career and managed to sustain it until his death. Horowitz earned an excellent reputation for his outstanding technical ability and the excitement he brings while playing.

Vladimir Horowitz was born on October 1, 1903, in Kiev, Ukraine (then in the Russian Empire). There are claims he was born in Berdyuchiv, but his birth certificates state otherwise. Vladimir was born to Samuil Horowitz and Sophia Bodik as the youngest child of four.

His father was an electrical engineer who distributed electric motors for German manufacturers. Despite being born in 1903, his father later claimed he was born in 1904, to exempt him from military service.

This date will appear on most of his references during his professional career. Growing up as a talented child, Vladimir Horowitz received his early piano lessons from his mother and enrolled at the Kiev Conservatory, in 1912. While there, he received lessons from the likes of Felix Blumenfeld, Sergei Tarnowsky, and Vladimir Puchalsky. Horowitz played for Alexander Scriabin at the age of ten.

In 1920, Vladimir Horowitz had his debut solo recital in Kharkiv. His popularity gradually grew and began touring Russia. Due to the economic hardship at the time resulting from the Civil War, he usually received bread, chocolate, and butter as payment. Nonetheless, he performed in several concerts and between 1922 and1923, he had played over 23 shows in Petrograd alone.

Despite his success as a pianist, Vladimir Horowitz resolved to become a composer. Under that disguise, he moved to the West, settling in Berlin to supposedly study with Artur Schnabel, but had planned never to return home. To sponsor his first concerts there, he stuffed his shoes with British pounds and American dollars.

Vladimir Horowitz's first concert away from home was in Berlin on December 18, 1925. He also played in London and Paris. In 1927, the Soviet authorities selected him to represent Ukraine at the inaugural International Chopin Piano Competition in Poland, but he opted out because he had decided to stay in the West. Horowitz made a United States debut at the Carnegie Hall on January 12, 1928, playing under the direction of Sir Thomas Beecham who was also making a US debut.

The concert was a great success, with his ability to excite the audience and earned critical acclaims for the performance. His first performance with conductor Arturo Toscanini was in 1933 at the Beethoven’s Piano Concerto No. 5 Emperor. The two performed together for many years in both concerts and recordings.

Vladimir Horowitz became a US citizen in 1944 after settling in the country in 1939. On February 1, 1968, he made a television debut during a concert taped at Carnegie Hall. The concert was broadcast nationwide on September 22 same year on CBS. Despite gaining a high reputation as a pianist, he always remained a pessimist about his piano playing ability. There were several times he had to be forced on stage to perform. He also withdrew from several public performances.

Vladimir Horowitz did his first gramophone recording ion the United States for the Victor Talking Machine Company in 1928. His first European-produced recording was Rachmaninoff’s Piano Concerto No. 3 with London Symphony Orchestra and Albert Coates produced by His Master’s Voice in London. He did several other recordings in the UK for His Master’s Voice including the famous 1932 account of Liszt’s Sonata in B minor. Back to the US in the 1940s, he recorded Brahms Piano Concerto No. 2, and the Tchaikovsky Piano Concerto No. 1 with the NBC Symphony Orchestra and conducted by Toscanini. In 1959, he made his first studio recordings of Beethoven piano sonatas.

In 1985, he signed with Deutsche Grammophon, with whom he did live and studio recordings including Mozart’s Piano Concerto No. 23. He did several other recordings for different recording labels.

Vladimir Horowitz married Wanda, daughter of Arturo Toscanini in a civil ceremony in 1933. They had a child, SoniaToscanini Horowitz in 1934. Horowitz was rumoured to be homosexual. He died of heart attack on November 5, 1989, at age 86 in New York City. He was interred in the Toscanini family tomb in the CimiteroMonumentale, in Milan, Italy.

Horowitz Vladimir received numerous awards and honours. He has several Grammy Awards including a posthumous Lifetime Achievement Award in 1990. He received the United States Presidential Medal of Freedom in 1986 and became an honorary member of the Royal Academy of Music, London in 1972. He was inducted into the Gramophone Hall of Fame in 2012.