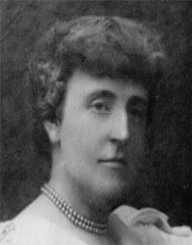 The author Frances Hodgson Burnett was born Frances Hodgson on the 24 November 1849 in Manchester, England to Edwin Hodgson and Eliza Boond. She was one of five children born to the couple and was four years old when her father died. After the death of her father, Burnett’s mother struggled financially. Following up an offer from an uncle in Knoxville, Tennessee, Burnett’s mother emigrated Tennessee in the United States with her children in 1865.

Frances Hodgson Burnett had her first short story published in 1868. By late 1869, she was able to assist her mother move the family into a more beautiful home in Knoxville. Her stories regularly sold to various magazines including Harper’s Bazaar and Scribner's Monthly. In 1870, her mother died and in a couple of years, three of her siblings married. By this stage, Burnett was engaged to Swan Burnett whose family lived close to the Hodgson’s in Knoxville. He was keen on literature and had introduced her to Charles Dickens and Sir Walter Scott.

Burnett travelled to England in 1872 and also visited Paris, France where she bought a wedding gown. Upon her return home, she married Swan Burnett (September 1873). Their first child Lionel was born in September 1874, and they moved to Paris so that Swan Burnett could continue his specialist medical studies. Burnett meanwhile, had started writing her first novel, That Lass o’Lowries. Her second son Vivian was born in Paris (b.1876) and shortly afterwards the family returned home to the United States.  Swan Burnett then established his medical career in Washington D.C.

Initially, Frances Hodgson Burnett's novel That Lass o’ Lowries was serialised and in 1877, she was offered a book contract to have it published. The novel was well received and resulted in a British edition which also sold well. After meeting Mary Mapes Dodge and Louisa May Alcott, Burnett was inspired to write children’s literature, as well as continuing to write novels. These early works include Louisiana (1880), A Fair Barbarian (1881) and Through One Administration (1883).

From the late 1880s, Frances Hodgson Burnett made frequent transatlantic trips between the US and England. It was around this time that she met her future husband, Stephen Townsend. Her son Lionel died in 1890 in Paris, France from consumption and Burnett returned to London where she got involved in charity work, founding the Drury Lane Boys Club.  She returned to Washington D.C. in 1892 when her son Vivien fell ill. He recovered and went on to study at Harvard University.  Burnett published her autobiography The One I Knew Best (1893). Other publications included The Shuttle (1906), Racketty-Racketty House (1906), The Secret Garden (1909), The White People (1920) and The Lost Prince (1914).

In 1898, Frances Hodgson Burnett divorced Swan Burnett. She bought Great Maytham Hall in the UK and divided her time between the US and England.  She married Stephen Townsend in 1900 but the marriage was unhappy, and they divorced in 1902. She became a naturalised US citizen in 1905 and 1907, left England for good and built a house on Long Island. Frances Hodgson died of heart failure in 1925 Plandome, Long Island, New York.