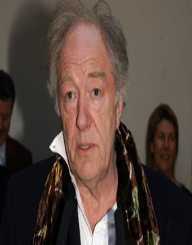 Michael John Gambon, a highly respected theatre, television and film personality widely recognized and adored as Albus Dumbledore, Headmaster of Hogwarts School of Witchcraft and Wizardry in the last six installments of J.K. Rowling’s Harry Potter series of films, was born on October 19, 1940, in Cabra, Dublin, Republic of Ireland. He was born and brought up in an austere Roman Catholic family comprising of his father Edward Gambon, an engineer and his mother Mary, a seamstress. A herculean task of rebuilding the war-ravaged London was on its way after the conclusion of World War II.

Gambon’s father decided to try his hand and contribute to the cause of the said rebuilding and moved to Mornington Crescent in North London. After settling down in London his father made Michael John Gambon a British Citizen, a decision which later turned out to be immensely beneficial for him in receiving the honor of the Knighthood and the awarding of the Commander of the Order of the British Empire (CBE).

Gambon came to London at the age of five and later started attending the St Aloysius Boys' School in Somers Town for his elementary education. After a while, he enrolled himself at the St Aloysius' College in Hornsey Lane, Highgate, London. He again shifted his residence and attended Crayford Secondary School after moving to North End, Kent. However, he left the school at the age of 15 without any requisite qualification.

His next assignment was undertaking an apprenticeship program in toolmaking with the British Engineering conglomerate Vickers Armstrong. He became a qualified engineer and toolmaker at the age of 21 and continued his association with Vickers for one more year. His vocation triggered a fascination in him of acquiring classic cars, antique guns, and clocks & watches. He also attended the Royal Academy of Dramatic Art to study classical acting from age 18 to 21 simultaneously with his engineering apprenticeship program. He earned a Bachelor’s degree in classical acting from the institute.

At the age of 24, Michael John Gambon made himself a part of the Gate Theatre, an Irish theatre based at Dublin after applying and suitably convincing Micheál Mac Liammóir, the Irish theatre impresario responsible for the operation of the Theatre. He made his professional stage debut performing the role of the ‘Second Gentleman’ in the Shakespearean drama Othello produced by Gate Theatre. He immediately followed his stage debut with a European tour along with Gate Theatre.

A year later, he was spotted by Laurence Olivier while auditioning for the historical Shakespearean drama Richard III. Olivier was at that time busy hunting and recruiting new promising talents for his new National Theatre Company. He was impressed with Gambon’s performance in delivering the opening soliloquy of Richard III while auditioning for the play and hired him for his theatre company. Michael John Gambon spent four years with National Theatre performing any number of small roles assigned to him.

In 1967, he joined the Birmingham Repertory Company where, for the first time, he found the opportunity of portraying title roles in his favorite Shakespearean productions including the likes of Macbeth, Othello, and Coriolanus.

Michael John Gambon made his presence felt in the arena of film, television, and radio. He made his film debut in 1965 in Laurence Olivier's ‘Othello’. He had a romantic lead role in the BBC television series, ‘The Borderers’ (1968–70). His excellent performance in ‘The Borderers’ prompted James Bond producer Cubby Broccoli to invite him for an audition for the title role in the Bond film ‘On Her Majesty's Secret Service’ (1969). However, he could not replace George Lazenby for the title role being a relatively unknown face than his counterpart at that time.

After appearing in a number of leading roles in the plays authored by Alan Ayckbourn including ‘The Norman Conquests at Greenwich’, he got a big break in 1980, when he was cast in the title role in John Dexter's ‘The Life of Galileo’. His portrayal of the character of the famous scientist catapulted him to immediate stardom acquiring more recognition and earning rave reviews from the concerned fraternity.

His rise to fame got another boost when he was cast to play the lead character Philip Marlowe, a mystery writer, crippled and bedridden by an enfeeble illness writing from his bed and narrating the stories of his imagination and hallucination, in Dennis Potter's ‘The Singing Detective’, an American public television mini-series broadcast in 1986. His craggy look and expert portrayal of the bizarre character soon made him a household name.

Continuing with the resounding success story of the 1980s, Michael John Gambon remained in the limelight in the 1990s too. His successful journey through stage performances and in feature films proceeded unabated with appearances including the likes of the controversial film ‘The Cook, the Thief, His Wife & Her Lover’. However, his magnum opus moment was reserved for the new millennium. In 2004, he was selected to play the role of Albus Dumbledore, headmaster of the Hogwarts School of Witchcraft in the film ‘Harry Potter and the Prisoner of Azkaban’, the third sequel of the Harry Potter series of films, a J.K. Rowling franchise. After his successful appearance in the film, he played the said character in the next four installments of the Harry Potter franchise. Altogether, he appeared in the last five films out of a total of seven Harry Potter films.

In 2015, Michael John Gambon announced his retirement from theater citing bad memory as the reason behind his decision.

Among the innumerable awards received by Michael Gambon for his performance on stage, films, and television, the BAFTA TV Awards are of specific significance. He won the award four times in his distinguished career including for his performance in the TV miniseries ‘The Singing Detective’ in 1987. Besides winning a huge number of awards in all formats of the public entertainment platform throughout his career, he was twice nominated for Emmy Awards and once nominated for the Golden Globe Award. In July 1998, he was conferred Knighthood by Prince Charles. He was featured in the list of top ten British character actors in July 2012.

Michael Gambon married Anne Miller when he was at the age of 22. They lived in their marital home near Gravesend, Kent. In 2002, he deserted his wife and began to live with his girlfriend and present companion Philippa Hart. The pair together has two sons. Gambon has another child from his earlier marriage with Miller.