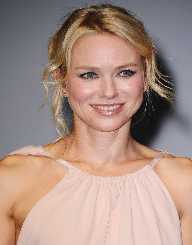 Naomi Watts is a British-born actress who has made it big on the big screen. From King Kong to 21 Grams, Naomi Watts has been working her way through many genres in the business.

Naomi Watts was born on September 28, 1968, in Shoreham, Kent, England.  Her parents divorced in 1972.  When her mother remarried in 1978, Naomi Watts and her brother moved to Suffolk.

In 1984, the family moved again, this time to Sydney, Australia.  Naomi Watts worked in numerous jobs with the intention of becoming a model.

When they moved to Sydney, she started at Mosman High School before enrolling in North Sydney Girls High School.  However, Naomi Watts dropped out before graduation.

Naomi Watts started as a model when she was 18.  Naomi Watts still had aspirations to become an actress while in school in England.  Her modeling career did not work well, but it did get her started in movies.

Her first role in the movies was in the 1986 film For Love Alone.  Naomi Watts took on her first television role in 1990 in the series Hey Dad..!

Naomi Watts acting career started to take off in Australia.  Naomi Watts worked in Australian films with big names including Nicole Kidman.  For two years she had roles in films such as Flirting, The Custodian, and Wild Sargasso Sea.

Naomi Watts moved to the United States in 1993 to pursue her acting career in Hollywood.  Naomi Watts was in films such as Timepiece and Children of the Corn IV:  The Gathering.  Her breakout role was the lead in Mulholland Drive in 2001.  This led to more starring roles in films such as The Ring. The movie 21 Grams with Sean Penn and Benicio Del Toro was the first role that earned her an Oscar nomination for Best Actress.  Naomi Watts continued with fan favorites including the sequel to The Ring and the remake of King Kong in 2005.

After the birth of her sons, she returned to acting.  Naomi Watts starred in films such as The International and Mother and Child in 2009 and J. Edgar in 2011. It was her role in The Impossible in 2012 that earned her another Oscar nomination for her portrayal of a British doctor trapped in Thailand during the 2004 tsunami disaster.  Naomi Watts portrayed Princess Diana in the biopic Diana in 2013.

Naomi Watts is working on more films, short films, television movies, and televisions series that are either in pre-production, completed, or post-production.

Naomi Watts continues her role as Evelyn in the Insurgent trilogy and has a role in the remake of Twin Peaks when it comes to television in 2017.

Naomi Watts is a UN Goodwill Ambassador.  She has worked on HIV/AIDS awareness programs since 2006.  Watts has traveled to Zambia in Africa and saw its impact first-hand.  She participates in many fundraising events for the cause.