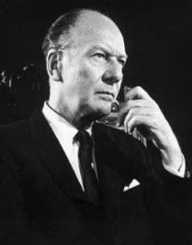 English actor and theatre director John Gielgud was born Arthur John Gielgud on the 14 April 1904 in London, England. His mother was Kate Terry-Lewis and his father, Frank Henry Gielgud. Gielgud was related, on his mother’s side, to the English actress Ellen Terry (b.1847-d.1828).

John Gielgud was a pupil at Westminister School. He then studied at the Royal Academy of Dramatic Arts in London.

John Gielgud made his stage debut at the Old Vic Theatre, London in 1921. In 1924, he appeared on stage as Romeo at the Regent Theatre in London. His first appearance in the United States was in 1928, in New York City. He was a member of the Oxford Playhouse and then joined the Old Vic company (1929-1931). His portrayal as Hamlet in 1929 brought him to national attention.

John Gielgud continued to impress in Shakespearean roles, and he made his name in Richard III, which he also directed. He was soon viewed as one of the most important Shakespearean actors of his generation. Plays he appeared in include The Importance of Being Earnest, The Seagull, The Potting Shed, School for Scandal and Tiny Alice. As a director, he worked at the Queen’s Theatre during the 1937-1938 season and then at the Haymarket Theatre in 1944-1945.

He was famous for his resonant speaking voice, voice acting in many radio programmes including dramas and plays. On television Gielgud appeared as Edward Ryder in the television adaptation of the Evelyn Waugh novel, Brideshead Revisited (1982). He also appeared in Summer’s Lease, Summer Day’s Dream (1994), an adaption of the J.B. Priestley novel. Elizabeth (1998) was Gielgud’s last film. He starred alongside Cate Blanchett who was cast as Elizabeth I, Geoffrey Rush, Christopher Eccleston, Joseph Fiennes, and Eric Cantona.

In 1953, John Gielgud was knighted by Queen Elizabeth II for services to the theatre. He also received the French Legion of Honour (1960), UK Companion of Honour (1977), UK Order of Merit (1996). Gielgud was also presented with honorary degrees from Oxford University, Brandies University, and St Andrews University.  He was President of the Royal Academy of Dramatic Art (1977-1989), and the Globe Theatre in Shaftesbury Avenue was renamed the Gielgud Theatre in 1966. In 1982, he won an Oscar as well as a Golden Globe for Best Actor in a Supporting Role for Arthur (1981). He was nominated six times for a BAFTA award and won three:  Best British Actor for Julius Caeser (1954),  Actor in a Supporting Role for Murder on the Orient Express (1975) and the Academy Fellowship Award (1992). He also won an Oscar nomination for Becket (1964).

John Gielgud was a homosexual, but because of the times he lived in, he took care to hide it. Weidenfeld & Nicolson published a book based on his letters to trusted friends, Gielgud's Letters in 2004. His long-term partner was Martin Hensler. John Gielgud died on the 21 May 2000 in Aylesbury, Buckinghamshire, England. He was 96 years of age.