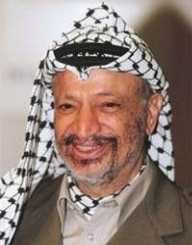 Yasser Arafat also was known as Abu Ammar, and he was born in Cairo in 1929. He rose to fame during the clashes between Palestine and Israel, and for 40 years he was the chairman of Palestine Liberation Organization. He was the former president of Palestine and through his liberation tact signed a peace treaty with Israel in 1991 attempting to cease the violence and border disputes.

Yasser Arafat was awarded the Nobel peace prize together with Rabin of Israel at the Camp David in 2000. Arafat resigned from his PLO chairman position in 2003 after much service to the Palestinian people. He died in 2004 of poisoning according to the Swiss report.

Yasser Arafat was born in 1929 in Cairo, Egypt. His mother died in 1933 after which he went to live with his uncle in Jerusalem then returned to Cairo in 1937. In Cairo, Yasser lived with his father but distantly with no close relationship until his father died in 1952.

While in Cairo as a youth, Arafat became an Arab nationalist and began smuggling weapons of war to Palestine that were used against the Israeli and British. This was a course that Arafat did not realize would be his lifetime endeavor. In 1948, he engaged in the fight against the Jews after he left Cairo University but was defeated, and Israel established their state.

The Al-Fatah was founded in 1958 by Yasser Arafat and some of his associates to assist in networking resistance against the Jews. The Fatah grew strong, and by 1960 Arafat became a full-time revolutionist organizing raids. This network (the Fatah) resulted in the Palestinian Liberation Organization (PLO) in 1964 which advocated for freedom in Palestine. However, war erupted, and Israeli troops prevailed against the Palestinians.

Yasser Arafat married Suha Tawil (aged 27) his secretary in 1990 while he was 61. They have one daughter named Zahwa.

With the founding of the PLO, Arafat’s strength was enhanced, and he gave a speech at the United Nations concerning peace in 1988. The Oslo Accords was formed in 1993 which gave Palestinians a democracy and Yasser Arafat was elected president.

The 1994 Nobel Prize for Peace was shared between three people, Yasser Arafat of Palestine, Shimon Peres and Yitzhak Rabin both from Israel. In 1995, Oslo II was signed which gave the foundation to peace treaties and many more agreements up to 2002.

The more treaties Yasser Arafat signed, the more elusive peace seemed to be between Palestine and Israel. With the rise in terror attacks, Arafat was locked in his headquarters by Israel due to pending investigations. Arafat fell seriously ill in October 2014.

According to his spokesman, Arafat’s illness began as the flu and was handled by doctors from around Tunisia and Egypt. His condition worsened, and he was rushed to Paris, France for further medical treatment, but he died in France on 11 November at the age of 75. He was mourned in Palestine for many days and prayers were held in different places of worship in commemoration to him.

Theories and conspiracies have come up to determine the cause of his death with the most probable one being poisoning. However, these arguments have been disapproved, and in 2015 it was announced that he died from natural causes.