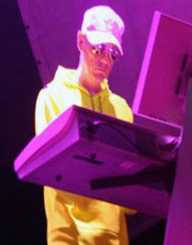 Christopher Sean Lowe is a prolific English musician and songwriter. His versatility has made him fuse several genres of music.

Christopher Sean Lowe was born on October 4th, 1959. His parents Clifford and Vivien Love had four children. Chris Love was the eldest. He attended Arnold house School in Blackpool, Lancashire. His love for construction led him to Liverpool University in 1978. He never graduated. Between 1981 and 1982, he was attached to Michael Auckett Associates. This was an architectural practicing firm in London. Lowe was good in architectural designing. His signature achievement was a staircase he designed. It was for an industrial complex in Milton Keynes town.

Chris Lowe also had a brief job in the toy department at Harrods store. It is during his stay in London that he met Neil Tennant. The two met in a music electronics shop on Kings Road. In waiting to be attended to, they started conversing. They talked over musicians and music. It was here that they realized their mutual love for music.

In his early years in Blackpool, Lowe was part of a local musical group. The group was called “One Under the Eight.” In the group, Lowe used to play the trombone. In London, he had not thought of making music a career. It took the persuasion of Tennant for Lowe to abandon architecture.

The pair continued to meet and became close friends. They started writing songs together. At first, they formed a band called the West End. The name never lasted long. They changed it to The Pet Shop Boys. It is from here that their rise to stardom started. In 1984, they brought in American music promoter Bobby Orlando. Bobby helped them produce their first single called “West End Girls.” The group recorded their first album in 1986. The title of the album was “Please.” The single hit “Love Comes Quickly” was also released in the same year.

Chris Lowe's genre of music is diverse. From pop, disco to electronica, he managed to create a broad audience for the group. Since the formation of the band in the 1980s, Lowe and Tennant have released many other songs. They still tour and record as a group.

Though still in the Pet Shop Boys, Chris Lowe has had several solo appearances. In 1993, he idolized Ian Wright of Arsenal football club. He wrote and produced a song for the footballer. The single was called “Do the Right Thing.”

During the Pet Shop Boys tour of Australia in 1995, Lowe had a cameo appearance on “Neighbors.” “Neighbors” is a soap opera popular in Australia.

He wrote the song “Streets of Berlin” in 2006. Again in 2011, Lowe was a vocalist in Stop Modernists song, “Subculture”

Chris Lowe is a man of style. He is known to change his hairstyles for the occasion. Lowe has had several hairstyles. He had long hair, short hair, to a completely shaven head. His apparel is equally diverse. In most photos, he is spotted in sunglasses. He likes sportswear clothing.

Chris Lowe was a gifted designer. His childhood dream was to be an architect. Sometimes in life, you have to meet others to discover yourself. Before meeting Tennant, Lowe had not found his potential in music. It took the sincere friendship of the two to bring out the talent. Lowe has contributed more to the society with music. Maybe had he stayed in designing, no one would have noticed his exploits.