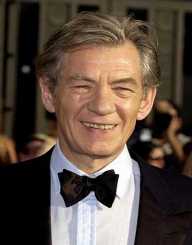 Ian McKellen was born on the 25 May 1939 in Burnley, Lancashire, England, six months before World War II broke out. His parents were Denis Murray and Margery Lois. He had a sister Jean, five years his senior. The family moved to Wigan during the war years and later returned to Bolton. When McKellen was twelve, his mother died of breast cancer. Then, when McKellen was twenty-four, his father died.

Ian McKellen's education commenced in Wigan where he attended preschool and primary school at the Disconson Street Wesleyan school. From primary school, he graduated to the Wigan Grammar School for boys. Later when the family moved back to Bolton, he was enrolled at the Bolton School. McKellen was a very able student and subsequently won a scholarship to Cambridge University. At Cambridge, he joined the Marlowe Society and appeared in many productions.

While at Cambridge Ian McKellen became friends with Derek Jacobi who also went on to have a stellar acting career in the UK. McKellen read English at St Catharine’s College. His tutor was Tom Henn, a Shakespeare and Yeats scholar. In 1961, McKellen graduated with a BA Arts degree.

Ian McKellen made his acting debut in 1961 at the Nottingham Playhouse when he played the role of Roper in A Man for All Seasons. Three years later he appeared in A Scent of Flowers, his first West End production. His next breakthrough was becoming a member of the National Theatre Company at the Old Vic. From then on, he found roles in a variety of productions. In 1969 critics were awed by his dual roles as Richard II and Edward II at the Edinburg Festival. By the 1970s, McKellen was well established in British theatre.

Through the 1970s and 1980s, Ian McKellen was an established and popular figure in British theatre. He performed in many successful plays at various venues including the Royal National Theatre.

Ian McKellen appeared in Six Degrees of Separation (1993). He won an Emmy in 1993 for And the Band Played. The movie Gods and Monsters (1998) dealt with homosexuality.  He was then cast as Magneto in the X-Men. A highlight for his many fans was when he played Gandalf in The Lord of The Rings trilogy. The first Lord of the Rings started shooting in New Zealand in 2001. Much was made of his appearance in the evergreen British soap opera Coronation Street, the longest running soap opera in the world. In 2009 he starred alongside Patrick Stewart at the Haymarket Theatre in London in Samuel Beckett’s Waiting for Godot.

Memorable and significant works include Ian McKellen's performance as the villain Magneto in the X-Men films.

His role in The Lord of The Rings as Gandalf the Wizard won him the Best Supporting Actor award from the Screen Actors Guild as well as an Academy Award nomination. His portrayal of Nicholas II in Rasputin earned many accolades. He thrilled crowds at the London Paralympics (2012) when he appeared in the opening ceremony as Prospero from The Tempest.

Ian McKellen has had an impressive list of achievements and awards throughout his life. He was Head Boy of Bolton School (1957-1958). President of the Marlow Society (1960-61. In 1971, he was elected to the board of Equity, representing British actors. He served on the British Council as an advisor on drama and dance. He was involved with fundraising for the Royal National Theatre. He has been honoured by various universities and gay organisations worldwide.

In 1979, Ian McKellen received a CBD. The Queen knighted him in 1990 for his service to the performing arts. In 2007, he was awarded the Order of Companions of Honour by Queen Elizabeth. The many acting awards he has received include Golden Globe (1996) for his portrayal of Nicholas II in Rasputin: Dark Servant of Destiny. In 1998 he won an Academy Award Nomination for Best Actor for Gods and Monsters. In 2001, he was nominated for an Academy Award, this time for Best Supporting Actor in Lord of the Rings.

As an activist, he was a co-founder of Stonewall,  a lobby group for the LBGT community in the UK.

He is a vegetarian. Politically, he supports Labour Party in the UK.  Ian McKellen had no descendants and mentioned in the documentary Who Do You Think You Are, that his family line will die out with him.

Diphtheria was a common disease when McKellen was young, and he contacted it when was three.

Ian McKellen is an iconic and revered figure in the acting world. He appeared in an episode of Who Do You Think You Are. He was astonished to find that he had an ancestor who had been an actor. Frank Lowe had enjoyed some success in Manchester at the Queen’s Theatre and had even appeared in a play in McKellen’s hometown of Bolton in 1876. Sadly, his ancestor star faded and he landed up in a workhouse, dying in poverty.

Long involved in the arts and theatre in the UK, Ian McKellen is a patron of the English Touring Theatre.  He is also resident and patron of the Little Guild of Great Britain.

His family attended the Congregational Church

Ian McKellen's legacy will be the fact that he was one of the greatest English actors of his generation. Another legacy will be his support for gay rights.