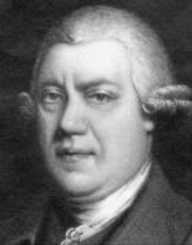 Sir Richard Arkwright was an inventor and one of the pioneering entrepreneurs during the industrial revolution.  He is remembered best for his organizational skills and the creation of the modern factory system. He successfully combined power, machinery, semi skilled labour and the new cotton raw material to mass produce yarn.

Richard Arkwright was born on 23 Dec 1732 in Preston, Lancashire, England. His parents were Sarah and Thomas. His star sign was Capricorn.
He was the youngest of the seven surviving children. His father was a tailor and could not afford to send him to school. He was taught to read and write by his cousin Ellen.

Richard Arkwright worked as an apprentice to Mr. Nicholson, a barber and then set up his shop in Bolton where he worked as a barber and wig maker. He invented a waterproof dye which became famous. This income helped him later to fund his cotton machinery.

Richard Arkwright was interested in spinning and carding machinery that turned raw cotton into thread. He teamed up with John Kay, a Warrington watchmaker. John Kay and reed maker Thomas Highs had worked on a mechanical spinning machine, but could not continue because of the paucity of funds. Arkwright’s backing helped in creating the spinning frame which was later known as water frame. Arkwright patented this machine in 1769. This machine produced strong twists for warps, and inexpensive cotton spinning was done.

Arkwright then made improvements to the existing carding machine invented by Lewis Paul in 1748. He patented this in 1775. This machine converted raw cotton buds into a continuous skein of cotton fibers. This was then spun into yarn.

Richard Arkwright first set up a small factory in Nottingham with John Smalley. Later with the partnership of Jedediah Strutt and Samuel Need he built his first water-powered mill at Cromford in 1771. About 200 people were employed consisting mainly of women and children. He improved his machinery and began setting up more and more mills. In 1776 he established a second larger mill in Cromford. The larger mill at Cromford required more workers and the small town could not meet the demand. Arkwright started to build cottages near the mill.

Richard Arkwright also built the Greyhound Public House. He encouraged weavers with large families to move to Cromford. Over 1,150 of his employees were children.  He employed children from the age of seven and sometimes as young as six years. This was increased to ten when he handed over the business to his son. He gave only a week’s holiday in a year. This was on condition that they remained in the village.
In 1777 he leased the Haarlem Mill where he used the steam engine to replenish the mill pond that drove the water wheel.

Richard Arkwright is known as the “Father of the Factory System.” He was born in poverty, but he was able to afford to build a castle with his profits and organization skills. Though he was criticized for his ways, he did contribute to the industrial revolution. He developed a disciplined and profitable factory system which is widely emulated. There were two 13 hour shifts in a day with an overlap. Bells rang at 5 AM and 5 PM. The gates were shut precisely at 6 AM and 6 PM. Latecomers were not allowed entry and lost an extra days pay.

Richard Arkwright was an aggressive man, and his employees found it difficult to work under him. His partners felt the same. He bought out his partners and went on to build factories. He hoped to achieve monopoly by obtaining patents for everything, but could not succeed. His patents were opposed, and he was embroiled in court cases.

Thomas Highs also claimed that his ideas were borrowed. Arkwright lost many of his patents but had already made a great deal of money. When he died in 1792, his fortune was about half a million pounds.

Richard Arkwright was knighted in 1786 and served as a Sheriff of Derbyshire.

The Arkwright scholarship was set up in 1991 to provide an award to future leaders in engineering and technical design.

Richard Arkwright married Patricia Holt in 1755. She died in 1756. The couple had a son Richard Arkwright Junior. In 1761 he married Margaret Biggins. They had three children and only one daughter, Susanna survived.