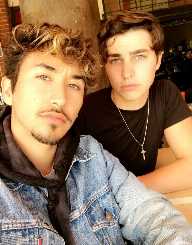 Brennen Taylor is best known as a teen actor, social media star, and a promising comedian. He first joined the online platform on Vine: a 6-second video application. He currently has over one million followers. With the support and appreciation from his fans, he joined YouTube, Twitter, and Snapchat where he shares necessary things with his supporters. He seemingly rose to fame not by chance but by his comedic nature. Taylor seems to partner with other Viners including Allicatt.

Brennen Taylor is known for his incredible personality that gives him a chance to plan and establish thing in a kind demeanor. He hates to adjust or see himself in new surroundings. In the middle of all, he is always happy when his plans are successful. He loves to be surrounded by lots of friends, and in the process, he likes to act as a comedic champ. He possesses a confidence nature but being competitive is his best cup of tea. Needless to say that he carries a sharp temper that makes him have ‘trusting issues.' He is a very active persona, and he simply keeps himself busy to forgo boredom. His tranquil outlook and humor are vividly seen in his YouTube and Vine videos.

On April 3, 1995, Brennen Taylor was born in California, the USA to Lisa. Taylor’s father’s name is not known, and there is little to no information about his private life. Nonetheless, he has a younger brother called Jake and sister named Jess.

Taylor’s fame came knocking when he appeared in a movie called Palo Alto in 2013.But he was still an active social media lad. He then appeared in Number3rs film which received positive acclaims. In 2009 he appeared in Sneakerhead episode which also cemented him to the world of fame. The same year he played in a short film called Fort Brother. After two years, Taylor signed up as a YouTuber where he now entertains over 600,000 subscribers with over a million views.

Brennen loves to stay indoors when not busy. He hates to go to parties, but he likes to rescue dogs. It was recently announced that he saved three of the neighborhood dogs from a burning building. Besides, he loves his mother to the core. In 2009 Taylor joined the likes of Nick Bean, Baby Ariel, and Weston Koury to launch a YouTube channel called Our Journey. Taylor’s loveable personality allows him to entertain his fans to the brim. I believe he has tons of things to share with the world. You better watch this space!