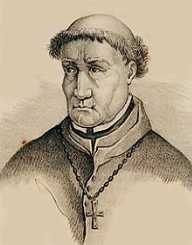 Tomas de Torquemada was a Spanish Dominican priest who was famous for his cruelty during the Spanish religious inquisition.

Tomas de Torquemada was born on 14 October 1420 in Valladolid Spain. By then it was still under the jurisdiction of the kingdom of Castile. He was from a theologian family of Christian converts from Judaism. One of his relations was Juan de Torquemada was a respected Catholic Cardinal in Spain.

Torquemada grew up in Valladolid. He joined the Dominican monastery of San Pablo at a tender age. After a while, he was elevated to the chief friar at the Santa Cruz monastery in the region of Segovia. While at Santa Cruz, Torquemada met with the heiress of the Castile kingdom, Princess Isabella I. He became the official priest and religious advisor to the princess.

In 1469, Princess Isabella married King Ferdinand of Aragon. In 1474 Princess Isabella was crowned queen of the Castile kingdom. Torquemada became the royal court religious counselor and priest of the two kingdoms. He used his power and influences to execute his deeply rooted fear of Jewish and Muslim converts to Christianity. The Moors who were Muslims from northern Africa ruled over half of the southern part of Spain.

In 1478, Kind Ferdinand implored over Pope Sixtus IV to constitute a Spanish inquisition. The pope granted the order. An inquisition was a wave of religious persecution of those the Catholic church saw as unholy. In the beginning, the masses rebelled against the official inquisitors. Some of the inquisitors were killed. The king requested help from the Pope. The Pope appointed Torquemada to head one of the inquisition offices in Spain.

He led the systematic purge of non-Christians in Spain and the Iberian Peninsula. He mostly targeted the Jewish, Muslim, converts to Christianity and his perceived enemies. Torquemada unleashed a wave of terror in the name of purification of the Spanish Catholic faith. First, he devolved his offices to several regional offices but still held the paramount decision-making authority. He then created a code of punishing the suspects. The guilty were either killed by burning, or were made to repent and forcefully get baptized. The repenting process consisted of wearing of ceremonial cloths denouncing your Muslim or Jewish faith. Some of the victims were jailed and released. Suspects had the right to appeal to the Papal office in Rome. Torquemada processed all the appeals before they went to Rome. So no appeal was ever successful.

Torquemada was the executor of the mayhem. Many Jews who were in prominent political or financial offices implored King Ferdinand to rescind the purge. In 1492 King Ferdinand decreed the expulsion of all Jews from Spain. Torquemada followed this decree to the letter. About 8,000 people were killed in the purge. Torquemada took his campaign to the Iberian Peninsula. With the help of King Ferdinand, he managed to force the downfall of the once flourishing Moorish caliphate. In 1492, the Moors surrendered to the Spanish King Ferdinand in the Treaty of Granada. Spain became a Catholic kingdom.

The persecution of other faiths continued in the Spanish colonies in the Americas. The rise of the protestant movement challenged the religious superiority of the Catholics. Three hundred years after Torquemada started the religious purge, the inquisition was stopped. In 1820, a revolution in Spain and its colonies resulted in the abolition of the practice. A formal act of law was legislated in 1869 to outlaw the practice.

In the entire period of the Inquisition, Torquemada was accused of being ruthless and sometimes taking bribes. The allegations reached the Papal office, but he was protected by the Spanish crown. Torquemada used his power to intimidate or persecute all he perceived as threats to his power. Even members of the royal court were targeted for being superficial Christians. These were Christians who professed other religions in secret.

He was himself a descendant of Jewish converts to Christianity. Torquemada managed to rid Spain of the anti-Catholic elements. He was instrumental in the downfall of the Moorish Islamic nation in southern Spain. His ruthless legacy in Spain and the colonial territories is still vibrant in the Spanish historical chronology. The name Torquemada is a synonym of ruthless brutality in Spain. He died in Avilla on September 16, 1498.