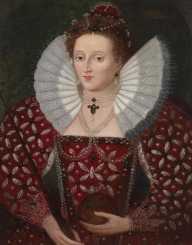 Queen Elizabeth, I was born in Greenwich Palace on 7th September 1533. She was the second born child of Henry VIII of England second wife, Anne Boleyn.

She became the legitimate heir of the England throne after his father divorced his first wife hence her sister Mary lost her position as the possible heir of the throne.

Elizabeth was raised from a Christian background and was baptized on 10th September 1533 by Archbishop Thomas Cranmer.

Her mother died when she was just two years and eight months, and Elizabeth was illegitimate to hold the throne. His father married another wife who later died while giving birth.

Elizabeth I learned to speak four languages from her friend Catherine Champernowne who later died in 1565. William Grinda became her tutor in 1544.

Roger Ascham later took over as her tutor after Granda's death. She completed her formal education in 1550. She became one most the most educated ladies of her generation.

His brother's reign came to an end when he died at the age of 15. Mary took over the throne, and when it became apparent that she would not get pregnant, she recognized her sister Elizabeth as the apparent heir of the throne.

Elizabeth I's sister Mary died on 17th November 1558 and Elizabeth assumed the queen's position at the age of 25. Her reign saw the country prosper and it was later referred to as ‘Golden Age.'

The question of marriage often arose during her reign. She turned down many offers, and she remained single up to the age of fifty.

Many historians have speculated that her desire not to have a man in his life was contributed by what Thomas Seymour did to her at the early stages of her life.

Elizabeth I's sister left her a country that was facing two major crises. First, there was increasing tension between various religions, and the country was facing war with France.

She established an act of uniformity with a standard prayer book. Her approach to a religious issue was moderate. She quickly found a solution to end the ongoing war with France. She managed to avoid any clash with Spain which was the superpower country.

Her country later clashed with Spain in 1588 over England's support of rebellion against Spain.

The final years of her life saw her reign saw her country face a lot of difficulties. There were rampant unemployment and inflations.

There were growing riots over food shortages, and Ireland was facing a major crisis. She sent Robert Devereaux to quell the crisis in Ireland who later returned to England to start his rebellion. He was executed in 1601 for attempted treason.

Queen Elizabeth, I died at the age of 70 on March 24, 1603, at Richmond Palace. It is believed that a cosmetic mixture of white lead and vinegar affected her health.

Since Elizabeth I had no children, her closest relative had to be chosen to take over the England reign. Mary Stuart, the child of her cousin who was her rival, took over the reins.