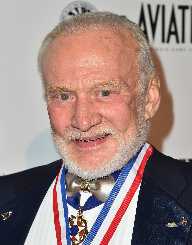 Buzz Aldrin was born on January 20, 1930, in Glen Ridge, New Jersey, USA. His parents were Marion (Moon) and Edwin Aldrin.

As a teenager, Buzz Aldrin attended the Montclair High School. He graduated from this school in 1946. Afterward, instead of going to college, he enrolled in the United States Military Academy. He later graduated from the academy with a Bachelor’s Degree in mechanical engineering. After earning this degree, he fought in the military. He later went back to school, this time attending MIT. There he earned his Doctorate degree in Science in Astronautics.

In 1951, Buzz Aldrin started his fighting career in the military. He joined the air force, first as a second lieutenant. He later worked his way up the ranks, becoming an officer. In the 1950’s, he fought in the Korean War. When the war was over, he worked as an instructor at the Nellis Air Force Base. He was later promoted to the Dean of Faculty for the United States Air Force Academy.

Buzz Aldrin was hired by NASA in 1963. He was a part of the third group of astronauts that NASA ever hired. He was later promoted to be a backup for a mission, but he never had to go on this mission. He went on one of his most important missions in 1966 when he took part in the Gemini 12 Flight. While on the mission, he spent four days in space, proving that work could be done outside of a spaceship.

Aldrin’s most famous mission was the 1969 Apollo 11 moon landing. Along with a group of astronauts, Aldrin landed on the moon on July 21, 1969. Following after Neil Armstrong, Aldrin was the second man to walk on the moon. The team spent a day on the moon, collecting rocks and other samples, taking pictures, and doing research. Afterward, he returned to Earth. He left NASA a couple of years later.

After leaving NASA, Buzz Aldrin went back to working with the military. He worked at the United States Air Force Test Pilot School. He worked here until 1972, he officially retired from the military.

After retiring from the military, Buzz Aldrin spent his time following some pursuits, one of which being is acting. In most shows and movies he was in, he played himself. Some of the shows and movies he has had cameo appearances in are listed below.

Throughout both his military career and his work with NASA, Buzz Aldrin proved to be an excellent worker. Because of this, he has been awarded numerous times some of his most prestigious awards are listed below.

After his career with NASA was over, Buzz Aldrin spent much of his time working on writing books. He wrote two biographies, a history book, and some children’s books. Some of his books are listed below.

Return to Earth
Magnificent Desolation: The Long Journey Home from the Moon
No Dream Is Too High: Life Lessons From a Man Who Walked on the Moon
Men from Earth
Reaching for the Moon
Look to the Stars

Buzz Aldrin was married three times. He was first married to Joan Archer in 1954. Together, the couple had three children: Andrew, James, and Janice. However, the couple divorced in 1972. He married again in 1975 to Beverly Van Zile. This marriage also ended in divorce in 1978. He was married for the last time to Lois Driggs Cannon in 1988. The couple divorced in 2012. Aldrin is currently unmarried.