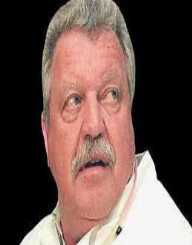 Chef Tell was a German-American cook and television personality.

Friedemann Paul Erhardt was born on November 5, 1943, in the city of Stuttgart, Germany. His father owned a newspaper. During a school play, he played the character of William Tell, a Swiss folk hero. Because of that, he got the nickname Tell. He started training to become a chef at the age of thirteen.

Chef Tell worked in many hotels and restaurants around Europe. He managed to build up an excellent reputation at a young age. In 1970, he earned the title of master chef. That same year, he took part in the Cooking Olympics in West Germany. He was the leader of a group of chefs that managed to win the gold medal. Because of all his success, he was named the Chef of the Year.

In 1972, Chef Tell moved to the United States. He settled in Philadelphia. He got a job at the Marriott Hotel on City Avenue. He made his first appearance on TV on the show Dialing for Dollars in 1974. After that, he had a regular spot on the show PM Magazine. He also received some time on the QVC network. He had some guest appearances on the series Lifestyles of the Rich and Famous. All of this led to him hosting his show on PBS, called In the Kitchen with Chef Tell.

Chef Tell opened up many restaurants around Pennsylvania, as well as one in the Grand Cayman Islands. He made a giant cake ordered by Walt Disney World for the 50th birthday of Donald Duck. He formed a friendship with President Richard Nixon, who was a fan of his restaurants. He was the spokesperson for several lines of kitchen products, such as Health Craft Cookware and Nordic Ware.

He also wrote a cookbook, called Chef Tell’s Quick Cuisine. It was a great hit, and it landed on the bestselling lists. He wrote another cookbook for people who had diabetes, but he did not manage to publish it. He spent two years teaching a culinary class in Philadelphia at The Restaurant School at Walnut Hill College.

Chef Tell was one of the first famous culinary TV personalities. The audiences liked him because of his cooking and his German accent. He was often the subject of parody on Saturday Night Live.