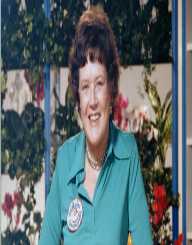 Julia Child was born on August 15th, 1912. She was a professional TV chef who introduced American to the world of French diets. She also earned her fame through her career as an author. She developed an interest in the French way of cooking after she left for France in 1948. She had one goal in mind; she wanted to bring the French culture into America’s way of cooking and make it easy for them to understand. As a result, she brought together a cookbook titled Mastering the Art of French Cooking. The book was inventive, and it has been used by most people to gain their culinary skills. Aside from being a skilled writer, she gained nationwide fame in her cooking show called The French Chef. Julia Child passed away at an old age of 91 years.

Julia Child was born on August 15th, 1912 in Pasadena, California. Her parents were John McWilliams, Jr., her father, and Julia Carolyn Weston, her mother. The couple had three children in total with Julia being the oldest of them. Her father worked as a land manager, and her mother was an heiress to a certain paper company.

As for her early education, Julia Child went to several schools including Katherine Branson School and Smith College. In both schools, she was active in sports as she played golf, basketball, and tennis. In 1934, she graduated from the Smith College with her degree in English. Immediately after her graduation, she migrated to the New York City. Here, she landed herself a job at the W&J Sloane furnishing company. She was assigned duties in the advertising department.

At the beginning of the World War II, Child wanted to enroll as one of the Women's Army Corps. However, she failed to be enlisted considering the fact that she was too tall. This, therefore, prompted her to join the Office of Strategic Services-OSS. Here, she worked as a typist but thanks to her academic qualifications that she was promoted to a higher post of being the chief researcher. This gave her the opportunity of working directly with the boss of OOS, General William J. Donovan. This post also gave her the advantage of touring the world with work duties in areas such as China, Washington, D.C., and Sri Lanka. In one of her trips, she began a relationship with a fellow OSS employee called Paul Cushing Child. The two later tied the knot in 1946.

Two years later, the couple migrated to France where Paul had been assigned duties. It is around this period that Julia developed a strong liking for the French cuisine. Soon, she enrolled in cooking classes at the Le Cordon Bleu. This was a famous cooking school in France back in the day. In 1951, Child paired with other students from her former cooking school to form the L'école des Trois gourmands cooking school. She partnered with Louisette Bertholle and Simone Beck. Their main intention was to teach the Americans the French way of cooking.

The trio strived to achieve their goal by having their guide in the form of writing. Their collaboration helped to come up with a book consisting of two volumes. It was a detailed book consisting of 734 pages. In 1961, Mastering the Art of French Cooking was published. The book gained popularity within a short period, and it emerged as the bestselling book for five subsequent years from 1961. This publication would, later on, act as a standard guide in the cooking community.

A year later after publishing their cookbook, Child went ahead to feature in a cooking TV series dubbed The French Chef. The show was also an instant success. Julia had become a star in her field. Subsequently, her show got the chance of being aired in 96 stations present in America. Considering the efforts and the changes she had brought into the American community, Child was bestowed with the George Foster Peabody Award in 1964. In 1966, she received an Emmy Award.

Julia Child suffered a kidney failure on August 13th, 2004 and she died on the same day.