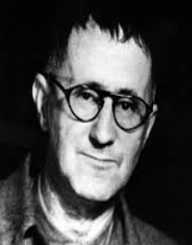 Bertolt Brecht alias Eugen Berthold Friedrich Brecht was a German national, born on 10th February 1898 in Augsburg. Although he did medicine in the university, his heart was in literature. He was a daring artist who put his dissatisfaction of the happenings in World War I into writing.

Bertolt Brecht learned the Bible from her religious mother. They lived a comfortable life since his father worked as managing director for a paper mill company. It was in his school days when he met Caspar Neher, a friend who later became his career partner.

He was 16 when World War I began. It affected Brecht's life; he disagreed with the happenings of that time.

Bertolt Brecht's father was a Catholic and his mother, a Protestant. Brecht went on to follow his mother's footstep becoming a Protestant. In 1922 Brecht married his long-term lover Paula Banholzer and had a daughter together. Their marriage only lasted for five years.

Until his death, he was married to Helene Weigel, who was an actress. He had two kids with her.

To escape the Nazi rule, he moved his family to Zurich in 1933, later moving to different places for security reasons.

Bertolt Brecht's first play was Baal, a narration of a youth who was in multiple relationships. It was produced later in 1923. He started writing Drums in the Night in 1918 and completed it in 1922. It became his first play that received theatrical production.

In one of his plays, Man Equals Man, done in 1926, he tries to explore themes of human identity and war. Four of his all times greatest plays included Life in Galileo, Mother Courage, Her Children and The Good Woman of Setzuan, written from 1938 to 1945.

Bertolt Brecht received Kleist prize in 1922 and the Drama Desk Award in 1970 for Rising and Fall of the City of Mahagonny.

He was later invited by Karin Michaelis to Denmark, where he stayed for six years before moving to Stockholm Sweden where he spent a year.

Bertolt Brecht was forced to leave Sweden after Hitler had taken over Norway and Denmark. On 3rd May 1941, he got a visa to move to the US.

Bertolt Brecht's biggest weakness was thought to be women. Throughout his life, he had more than three lovers at every stage of his life.

His reluctance, to help a Russian man who later died in USSR after he was arrested, caused anger among the Russian emigrants.

According to his medical records, Bertolt Brecht contracted rheumatic fever during his childhood which led to the enlargement of his heart. At the age of 58, Brecht had a heart attack and died.