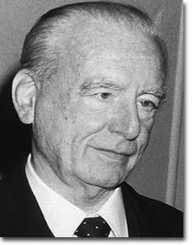 Ernst Ruska was a German physicist who brought a revolutionary change in the study of Physics with his invention – the electron microscope.

This device allowed scientists to see sub-atomic particles and make groundbreaking discoveries. For his tremendous contribution to the world of Physics, Ernst Ruska was awarded the Nobel Prize in Physics in 1986.

Ernst Ruska was born in Heidelberg, Germany on December 25, 1906.  His parents Julius Ruska and Elizabeth had seven children. His father Julius was a university professor. His brother Helmut was also known to be a pioneer in the research field later in his life.

From an early age, Ernst Ruska was interested in technology, and his father’s job allowed him to get the exposure that would satisfy his technological cravings.

Ernst Ruska was deeply involved with research in the field of magnetism and electric current. In 1931 itself, he was able to build a prototype of what would later become his greatest invention – the electron microscope. Working under the Fernseh Corporation, he along with others developed a high-performance CRO (Cathode Ray Oscilloscope). In 1937, he started working at Siemens. He also became a lecturer at the University of Berlin in the same year.

By 1949, he was extensively developing electron microscopes and with the help of Siemens, built an institute to promote research work carried out with the instrument. In 1959, Ernst Ruska became a professor at the University of Berlin for the field of electron microscopy and started working there full time. He continued on this job till 1974.

Ernst Ruska received many awards for his contributions in the field of science. Some important ones are the Albert Lasker award in 1960; the Paul Ehrlich & Ludwig Darmstaedter award in 1970 and the Nobel Prize in Physics in 1986 for his invention of the electron microscope.

Ernst Ruska was married to Irmela Ruth Geigis in 1937. The couple produced two sons and a daughter together. Ruska’s star sign was Capricorn.

With the invention of the electron microscope, it was now possible to view and study the sub-atomic particles. This opened great avenues for research in all fields of science including – physics, chemistry, biology, medicine and many more areas of research.