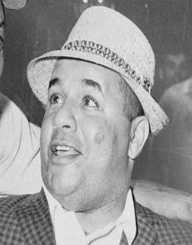 Roy Campanella was born on November 19, 1921. He was an American baseball player. He was also known as ‘Campy.’ He played the position of a catcher. He played for the Mexican and Negroes League. In 1958, he got paralyzed, and hence his career ended. He died on June 26, 1993, at the age of seventy-one.

Roy Campanella was born on November 19, 1921, in Philadelphia in Pennsylvania. He was born to John and Ida. His mother was African American while his father was born to Sicilian immigrants. When he was sixteen years old, he dropped out of school.

Roy Campanella started his career in 1937 when he began playing for the Washington Elite Giants in the Negro League Baseball. In 1938, he moved with the team to Baltimore.

He became the team’s star player. In 1942 and 1943, he played baseball for Monterrey Sultans in the Mexican League. In 1946, he moved into the Brooklyn Dodgers’ Minor League system. That season he played with the Montreal Royals.

In 1957, the Brooklyn Dodgers moved to Los Angeles where they became the Los Angeles Dodgers. However, Roy never played in Los Angeles because he was paralyzed from a car accident. The accident left him paralyzed from his shoulders down. Physical therapy helped him gain back the use of his hands and arms.

Roy Campanella, however, used a wheelchair for movements for the rest of his life. In 1959, he became the assistant supervisor for the Dodgers for the scouting of players from the Eastern part of the United States. He was also the special coach at the Dodgers’ annual spring training camp in Florida.

The same year, the team honored him with the Roy Campanella Night at the Los Angeles Memorial Coliseum. In 1969, he was inducted into the Baseball Hall of Fame.

He also received the Bronze Medallion from New York City. In 1971, he was elected to the Mexican Professional Baseball Hall of Fame. In 1978, he moved to California where he became an assistant to the Dodgers’ director of community relations, Don Newcombe.

In 1963, Ruthe passed away. In 1964, he married Roxie Doles who survived him. Roy Campanella died on June 26, 1993, of heart failure at his home in California. He died at the age of seventy-one. His remains were cremated at the Hollywood Hills Cemetery, Los Angeles.