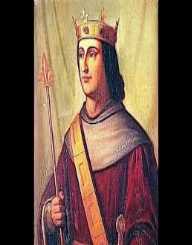 Charles was born at the Hotel Saint-Pol in Paris on December 3, 1368. His mother was Joan of Bourbon, and his father was King Charles V. He had six sisters and two younger brothers.

Charles became King of France in 1380 when he was 11 years old. Because of his young age, his four uncles acted as his regents. Three of them were his paternal uncles – Philip, Louis, and John. The fourth was his maternal uncle, Louis. All of them spent large amounts of money to fund their separate interests. In 1388, Charles VI ended the regency and took over the throne.

He immediately made financial reforms to make up for the damage his uncles caused. Because of this, the people started calling him Charles the Beloved.

In his early twenties, Charles VI started suffering from episodes of psychosis. He often became violent and aggressive for no reason. He sometimes forgot his name and failed to recognize his family members. On one occasion, he believed that he was Saint George. On another, he thought that he was made of glass. He sometimes refused to bathe and change his clothes. The illness became worse as he got older. Because of this, the people started calling him Charles the Mad.

In 1394, Charles VI signed a decree to expulse the Jews from his domains. After his mental health got worse, a regency council was formed. It contained his wife, his uncles, his brothers, and many royal officials and advisers.

They helped him rule France, making most of the decisions instead of him. They had to deal with the constant battles with the English during the Hundred Years’ War. In 1420, Charles VI signed the Treaty of Troyes, giving King Henry V of England the right to the French throne. He also gave him the hand of his daughter in marriage.

In 1385, Charles VI married Isabeau of Bavaria. They had daughters Jeanne, Isabella, Michelle, Marie, and Catherine. They had sons Charles, Philip, Louis, and John. As Charles’s mental health worsened, he became abusive towards his wife.

In 1407, he began an affair with a woman named Odette de Champdivers. She spent a lot of time taking care of him while his wife was usually absent. Many people started calling her the “little queen.” The two of them eventually had a daughter named Marguerite.

Charles VI passed away at the Hotel Saint-Pol on October 21, 1422. He was 53 years old. His body was buried at the Saint-Denis Basilica in Paris. After his death, his grandson, Henry VI of England, took the French throne.

Charles VI was the subject of Christine de Pizan’s poem “Prayer for the King” and Gerard de Nerval’s poem “Reverie of Charles VI.” He appeared as one of the characters in William Shakespeare’s play Henry V. He was featured in Rainer Maria Rilke’s novel The Notebooks of Malte Laurids Brigge, Hella Haasse’s book In a Dark Wood Wandering, and Vanora Bennett’s novel Blood Royal.