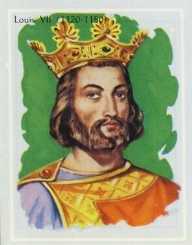 Louis VII was born in 1120 in Paris, France. He was the second son of Louis VI, King of France and Adelaide of Maurienne. His older brother died in 1131 in an accident making him the only heir to the throne of France. The early education imparted to him was focused on a pastoral career. Thus, he grew up to become an exceptionally pious man with a wealth of knowledge. However, the premature death of his older brother changed the course of his life.

Shortly after the death of his older brother Philip, King Louis VI anointed him as the successor of the throne. Pope Innocent II presided over the crowning ceremony of Louis VII held in the Reims Cathedral.

Upon his anointment, he spent most of the time of his youth in Saint-Denis, a commune in the northern suburbs of Paris. During his stay in Saint-Denis, he developed a strong bonding with Abbot Suger, who served his father as an advisor and also assisted him loyally in the early stages of his reign.


Early Reign as The King  Of France

Upon the death of Louis VI in 1137, Louis VII became the sole ruler of the kingdom of France. However, before his death, Louis VI finalized his son's marriage with Duchess Eleanor. The wedding followed shortly after the death of Duke William X of Aquitaine, father of Eleanor.

Duchess Eleanor of Aquitaine was one of the most affluent and powerful ladies in Western Europe. She succeeded her father after his death and brought Aquitaine as her dowry to King Louis VI. With the efficient and robust support of Abbot Suger, King Louis VII was able to maintain order in the royal domain and secure justice in his royal court. The system of ensuring justice to the deserved received enormous respect for the crown. The well-oiled machinery of his administration became stronger and earned more loyalty.

However, the addition of disorderly Aquitaine spelled trouble for his kingdom. To add salt to his injury, the wild nature of Eleanor was in sharp contrast with that of the monkish Louis VII. Louis VII was brought up in a reserved, frosty culture of the northern court, whereas Eleanor was accustomed to the rich, freewheeling court life of the Aquitaine.

Contrary to her ambition of marrying a macho king, Eleanor found to her horror that her husband is an ascetic. Naturally, the marriage was not supposed to last long.

First Part of The Reign of King Louis VII

The first part of the reign of King Louis VII was smooth, where Louis VII enthusiastically showed the right priorities. Barring the uprisings by the burgesses of Orléans and Poitiers, his kingdom was peaceful and without any disturbances.

He also had his fair share of controversy when he became directly involved in a confrontation with Pope Innocent II. The dispute was regarding the selection of a candidate to fill the vacant post of Archbishopric of Bourges. Both tried to promote their candidate.

Second  Part of His Reign

During the second part of his reign, Louis VII involved himself in a war with Theobald II of Champagne. The unnecessary war dragged on for two years and concluded in 1143. The main problems he faced in the second part of his reign were dealing an untrustworthy wife, who developed a sexual relationship with her uncle Raymond of Poitiers. The intervention of Pope Eugenius III delayed his effort to annul the marriage.

Abbot Suger also tried his best to save the marriage. In 1151, Suger died, and Louis VII succeeded in annulling his marriage with Eleanor with the help of a council of Bishops.

Beginning  of The Long Rivalry Between France And England

Within less than two months upon the annulment of the marriage between Louis VII and Eleanor, the latter married the Duke of Normandy and Count of Anjou, Henry Plantagenet. With this marriage, Aquitaine came under the control of Henry. Thus, Louis VII became cornered by the smart and aggressive Henry, who ruled Western France from across the English Channel. Incidentally, Henry ascended the English throne after two years. With Henry’s ascension the long rivalry between the two neighboring countries, England and France, marked its beginning.

Besides marrying Duchess Eleanor of Aquitaine, Louis VII had tied the nuptial knot two more times. After the annulment of his first marriage in 1152, he married Constance of Castile in 1154. The marriage ended after the death of Constance in 1160. He married Adèle of Champagne in 1160 immediately after the death of his second wife.

His third wife proved lucky for him who bore a son for him in 1165. In 1179, he had his son Philip crowned at Reims. He could not attend the crowning ceremony due to a paralytic attack. He passed away on September 18, 1180. Initially, he was buried at Barbeau Abbey and later in 1817 his mortal remains were shifted to the Basilica of Saint-Denis.