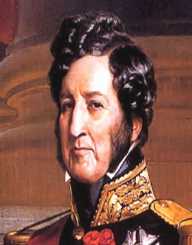 Louis-Philippe was the last King of France, and his reign came to be known as the July Monarchy. He spent his in exile before becoming France’s King and spent the rest of his days at England when he was abdicated.

Louise-Philippe married Marie-Amélie, a Neopolitan princess, which he made the acquaintance of while he was living in exile at England.

Louis-Philippe was born at the Palais Royal in Paris, France on October 6, 1773, as the eldest child of Louise Marie Adélaïde de Bourbon and Louis Philippe, the Duke of Chartres. A prince by royal blood, he was granted the title “Serene Highness” of the House of Bourbon. Louis-Philippe had two younger brothers and a younger sister.

Coming from a wealthy household, he was given one of the best education. He was educated under the tutelage of the Countess of Genlis, which started in 1782 when he was nine years old. The Countess instilled in him an attribution to the liberal thought that he carried on well until his adulthood.

Like his father, Louis-Philippe was also a supporter of the French Revolution. Their home at the Palais Royal served as the meeting place for the revolutionaries for a year from October 1788 until October the following year in 1789. He joined the French Army soon after and served under the Duke of Biron, Armand Louis de Gontaut, which also happens to be his father’s crony. He went in and participated at the battle in Austria but deserted a year later in April 1793.

The same year, his father was executed in France, one of the many casualties during the Reign of Terror. Due to the event unfolding in his country, he was unable to come home and thus forced to live in exile. For a time, he lived in Switzerland where he taught for a living before moving to Sweden. However, he once more relocated and this time to the United States but finally settled in England instead. In England, he made peace with his fellow Bourbon relatives along with fellow exiles.

Louis-Philippe managed to come home at the fall of Napoleon Bonaparte’s regime in 1814. With Bonaparte out of the way, the monarchy resumed, and Louis XVIII took the throne. He managed to regain his title as Duke of Orléans, after his father and took back his familial estates.

When Charles X succeeded the throne of his brother, Louis XVIII, in 1824, he was not welcomed by a great many, most notably the bourgeoisie due to his policies. At the time, Louis-Philippe maintained contact with opposition groups while also being one of the wealthiest men in the country. In 1830, Charles X issued four repressive ordinances, which significantly triggered the opposition groups that caused the July Revolution and ultimately led to the loss of control by the monarchy. Soon after, Charles X was abdicated, and Louis-Philippe assumed power and was reigned as a King on August 9, 1830.

His ordination was done under a revised charter, therefore limiting his power, hence being dubbed as the “Citizen King” by the French people. His reign came to be known as the “July Monarchy” as he had assumed power after the July Revolution.

Despite his connections and supporters, Louis-Philippe’s reign proved to be disappointing to the general public. With economic problems on the rise, more uprisings took place during the 1830s until the country eventually suffered from Depression in 1846. Two years later, a revolution broke out in 1848, which led to his abdication from the throne in February of the same year. As a result, Louis-Philippe fled the country, disguised as "Mr. Smith." He died on August 26, 1850, at the age of 76 in his home at Claremont, Surrey.