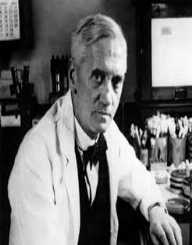 French bacteriologist Charles Nicolle was born on the 21 September 1866 in Rouen, France. His father Eugene Nicolle was a doctor who worked at the Rouen Hospital as well as being a medical lecturer. Nicolle was one of three sons. His elder brother later becomes a professor at the Pasteur Institute in Paris as well as a Director of the Bacteriological Institute of Constantinople.

Charles Nicolle attended the Lycee Pierre Corneille in Rouen before studying at the University of Paris, completing his medical degree at the Pasteur Institute in 1893.

Once Charles Nicolle had obtained his medical degree, Nicolle returned to Rouen and took up a position in the medical faculty at Rouen University.

In 1903 Charles Nicolle became the Director of the Pasteur Institute in Tunis, Algeria.

Helene Sparrow joined him in Tunis as his laboratory chief. Under his directorship, the Pasteur Institute in Tunis became a leading bacteriological research center working on and producing many vaccines and serums for infectious diseases.

Charles Nicolle was an overseas associate of the French Academy of Medicine, winning the Prix Montyon in 1909, 1912 and 1914. In 1927 he was awarded the Osiris Prize, and his Silver Jubilee in Tunis in 1928 was commemorated with a special Gold Medal.

He was awarded the Nobel Prize in Medicine or Physiology in 1928 for his research into the cause of typhus. Nicolle became an elected Professor in the College of France in 1932.

As well as having a scientific mind, Charles Nicolle was also drawn to the arts. He wrote fiction and was inspired music, philosophy and the arts in general.