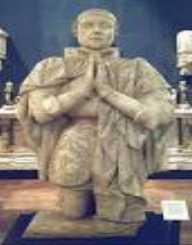 Spanish King Peter of Castile and Leon was born on the 30 August 1334 in Burgos Spain to King Alfonso XI of Castile, Leon and Galicia and Maria of Portugal. His mother was the daughter of King Afonso IV of Portugal.

King Peter was homeschooled by private tutors and well educated.

Ascension to the throne of Castile

When his father, Alfonso XI, died in March 1350, Peter ascended the throne of Castile at the age of 15. He had various issues to deal with including his mother’s interference in court affairs and obtained assistance from the Minister of Albuquerque. His illegitimate half-brothers were also a source of concern. One of his illegitimate half-brothers was Henry of Trastamara who led several revolts.

His marriage to Blanche of Bourbon was not a happy one, and he later claimed that it had been annulled when he entered into a marriage with Juana de Castro. Upon their marriage, Juana was crowned Queen of Castile. The marriage was short-lived; they had one child, a son who died at three months. Queen Blanche died in 1361; some historians believed that Peter had her murdered. The same year, de Padilla also died.

The War of the Two Peters

Between 1356 and 1375, war raged between his kingdom of Castile and Aragon, led by Peter IV.  Peter’s illegitimate brothers fought on the side of Aragon. King Peter lost the throne in the Castilian Civil War. He fled to Portugal and eventually Galacia. During 1366, Peter sought refuge with Edward, the Black Prince who after the Battle of Najera in 1367, restored him to the throne.

Henry of Trastamara returned to Castile in September 1368 where some recognised him as the King, while other continued to support Peter. King Peter retreated to Andalusia, and when they met in battle at Montiel, Henry was victorious. Peter tried to make a deal with du Guesclin to betray Henry but the offer backfired and on the 23 March 1969, de Guesclin took Peter to his tent, pretending to accept his deal.

Instead, Henry was in the tent and assassinated his half-brother, King Peter. Peter was the last ruler of the main branch of the House of Ivrea. The war ended in 1375 when the Peace of Almazan was signed. A marriage between Peter IV of Aragon’s daughter Eleanor of Aragon to John I of Castile took place.