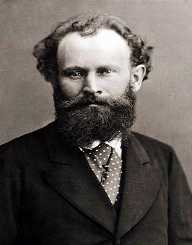 Edouard Manet was a French painter who is most famous for his use of Realism and Impressionism.

Edouard Manet was born into an affluent Parisian family on 23 January 1832. Manet’s father, Auguste Manet, was a judge and his mother EugénieDessier Fournier was from a wealthy family with connections to the Swedish Royal Family. It was Manet’s uncle, Edmond Fournier, who encouraged him to paint and fostered an interest in art by bringing the young Manet to museums. Edmond also advised the young Manet to take drawing lessons at school.

Manet twice failed the examinations to enter the French Navy and instead pursued a full-time art education. He studied under Thomas Couture and was a frequent visitor to the Louvre. Manet also travelled to seek inspiration for his work; he visited the Netherlands, Germany, Spain, and Italy.

Edouard Manet's earliest works were all adopted the style of Realism. Manet would paint contemporary people such as singers, gypsies, and beggars. Notable early works include The Absinthe Drinker, The Spanish Singer, and Boy Carrying a Sword; All were painted between 1859 and 1861. Another feature of Manet’s early work was his paintings of religious and mythical subjects.

Manet created some works on Jesus and classical mythology such as Christ as a Gardener, The Surprised Nymph, and The Dead Christ with Angels, these were completed between 1859 and 1864. This early career Realism style was based on the work of Gustave Courbet who pioneered the style. Manet began to receive notoriety for his work following his completion of The Spanish Singer in 1860. The painting presented a new take on Realism and attracted a lot of attention.

Edouard Manet's works began to expand and focussed on people at leisure, some his most famous works deal with such subject matter. The Music in the Tuileries, painted in 1862, is one such example. It depicts a scene of a large group of people in a park enjoying music. The painting is done in Manet’s unique Spanish influenced realism.

Olympia was deeply controversial and received widespread criticism, but this just heightened Manet’s fame. Manet came to socialise in impressionist circles during the later 1860s and became influenced by their styles. The impressionists did not publish their works in the Paris salons and instead held independent exhibits. Edouard Manet began to follow suit as his work and reputation saw many of the salons reject his work.

Manet began to expand his subject matter. He painted numerous café scenes, often from sketches he had drawn at the scene. He also started depicting the upper classes in paintings such as The Races at Longchamp and The Luncheon. Manet was also deeply influenced by military events surrounding France at the time. The American Civil War and the Mexican Revolution became subjects of his painting.

His first war painting was Battle of the Kearsarge and Alabama, which was based on a battle between two American vessels off the coast of France in 1864. The Execution of Emperor Maximilian depicts the execution of the Habsburg and French-backed Emperor of Mexico by firing squad. The painting was unfinished and is today displayed in the Museum of Fine Arts in Boston.

Edouard Manet also depicted the Communard rebellion in Paris in 1871. The Barricade illustrates the execution of Communards by government forces in 1871. In his later life, Manet’s work focussed on still life paintings of flowers and fruit. His final paintings before his death were of flowers in vases, Flowers in a Crystal Vase (1882) and Carnations and Clematis in a Crystal Vase (1883).

Edouard Manet's health deteriorated quickly during his forties. He developed partial paralysis in his legs and other known side effects of syphilis. His left foot became riddled with gangrene and had to be amputated in 1883. He died soon after on 30 April 1883. He is buried in Passy Cemetery in Paris.

Edouard Manet married Suzanne Leenhoff in 1863. Leenhoff had been employed by Manet’s father to teach his son’s piano. Manet had been romantically involved with her for over ten years before their marriage. It is also suspected that she had affairs with both Manet’s brother and father. Leenhoff had a son, Leon, who may have been Manet’s son, half-brother or nephew.

Both Leenhoff and Leon were subjects in Manet’s work. Leon is the eponymous boy carrying a sword in Boy Carrying a Sword, painted in 1861. Leenhoff modeled for Manet in The Luncheon on the Grass and Berthe Morisot with a Bouquet of Violets.

Edouard Manet had completed 430 oil paintings, 89 pastels and 400 sketches and drawings. During his life, Manet’s style was often criticised for its rough and unfinished appearance, but it was also this style that attracted notice to his work. His work rejected the renaissance style of dark lighting and multiple layers Thomas Couture taught him. Instead, Manet made use of light tones that allowed him to complete works in a single sitting.

Many see Manet as the father of Modernism as his use of both Realism and Impressionism show a marked break with previous works that had focussed on Humanism. Manet was also a pioneer regarding his subject matter. His focus on urban life was a somewhat recent development and very unusual for what was termed high art.