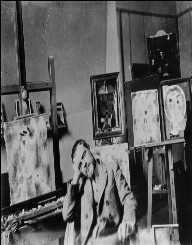 Paul Klee was a Swizz-German painter who is known to have refused to adhere to artistic movement throughout his career. He was highly gifted and an educator who holds a lecture on different modern arts. He also taught at German Bauhaus School of Art, design, and architecture. Presently, his unique and better style is known to have influenced a whole lot which includes expressionism and surrealism, He is very creative and highly independent.

Paul Klee engaged a lot of traditional norms which made him explore and use poetic ideas in whatever he does either in painting or writing. He believes the world is made of matter and open to realities. He is a musician who loves violin and always wish to connect the music with visual arts. He has done a lot in proving that there will be an unrestrained and free-flowing art of children.

Paul Klee was born as the second child of Hans Wilhelm Klee, a German music teacher, and his Swiss wife, Marie Klee. He had only one elder sister and was encouraged into music from childhood. He started attending violin classes at the Municipal Music School since he was seven. He became a member of the Bern Music Association at age 11 due to his extraordinariness. Paul Klee, later on, turned to art which he later studied at the Academy of Fine Arts in Munich. He drew well while he was a school but was criticised for lack of natural color sense. He received his Fine Arts degree in Italy and traveled to Italy between 1901 and 02 to study the master of painters for different centuries. He later returned home to take occasional art classes.

His career started with some experimental techniques of the 1900s which include etching as well as drawing with a needle on a blackened pane of glass. At this period, he worked on a series of etchings which he called Inventions. He was also known to be a violin player and have organized different writing concert reviews. Later on, in 1911, he joined the editorial team of the journal Der Blaue Reiter which was founded by Franz Mac. His work kept going to the next level of maturity with some experiments to his name. Most of his friends were killed during the World War I, and this affected him deeply. He script Death for the Idea to show his experience about life losses.

Paul Klee joined the German Army in 1916 during the first world war and worked as a clerk and as well as restoring aircraft camouflage. He kept on painting throughout the world war I and exhibited in some several shows. By 1917, he became known by many and named the New German artists. He secured in 1919, a three-year contract with dealer Hans Goltz with whom he gained his exposure. He was able to connect with Klee’s commercial success. Later on in 1920, Walter invited him to join the faculty of the Bauhaus and which he joined.

Paul Klee then started lecturing in the school of architecture and industrial design. His friend later joined him there later, and they formed the Blue Four group with other two artists and had to tour the United States for lecture and exhibition. 1931 was when he started teaching in Dusseldorf Academy before being fired under Nazi rule in 1933. He, however, suffered from ill health and had a reduced output in painting which he did until his last day.

His known to have had many affairs with different people of both low class and artists’ models. Paul Klee is known to have developed the habit of frequenting pubs at a very young age. However, he miscalculated in 1900 as one of his numerous relationships resolved into a pregnancy. The baby, however, died after a few weeks of birth. He married in 1906 a Bavarian Pianist, Lilly Stumpf and had a son, Felix with him.

Paul Klee always ensures that his child gets the best knowledge he will ever need. Most of the time, he kept the house and also focus on his art while his wife gave piano lectures. However, the gentleman had Scleroderma in his later years. This caused a lot of pain which was unbearable. He painted Death and Fire to depict his pain. He finally died on 29 June 1940 in Muralto, Switzerland.