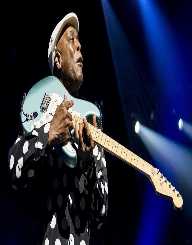 George “Buddy” Guy was an American singer and blues guitarist. Born on July 30, 1936, he has strongly influenced the works of guitarist like Eric Clapton, John Meyer, Steve Ray Vaughan, Jimi Hendrix, Keith Richards, and Jimmy Page among others. Buddy Guy who self-thought in guitar at a young age has been a strong proponent of Chicago blues. Buddy Guy worked with Muddy Waters at Chess Records and formed a musical partnership with Junior Wall, a harmonica player. Rolling Stone magazine ranks him at number 30 in the 100 Greatest Guitarist of All Time.

Buddy Guy was born on July 30, 1936, Lettsworth, Louisiana to Sam and Isabel Guy. Buddy Guy had four siblings including Phil Guy, who also became a blues musician. Buddy Guy was raised in Lettsworth, Louisiana along with his siblings. Guy had interest in music and playing the guitar at his early age. He learned how to play the instrument using a self-made two-string bow. He has later had a harmony acoustic guitar.

Buddy Guy began his career at an early age performing with bands in Baton Rouge in the 1950s. During this period, he was also working as a custodian at the Louisiana State University. On September 25, 1957, he moved to Chicago, where he was highly influenced by Muddy Waters with whom he later worked with. Buddy Guy met Otis Rush who introduced him to the 708 Club, where Buddy Guy would frequently perform. It was in the club that he met Muddy Waters. In 1965 and 1966, Buddy Guy recorded sessions with Junior Wells for Delmark Records.

Buddy Guy performed in the European tour American Folk Blues in 1965. With the help of Willie Dixon, Buddy Guy landed a contract with Chess Records as a guitarist. His debut album under Chess was I Left My Blues in San Francisco in 1967. This was also Chess refusing to record him play in the novel style of his live shows. Buddy Guy was later used as a session guitarist for Muddy Waters, Sonny Boy Williamson, Koko Taylor and Howlin’ Wolf among others. In March 1969, he performed at the Supershow in Staines, England alongside many others including Led Zeppelin, Buddy Mills, and Glenn Campbell.

Buddy Guy partnered with L.C. Thurman to establish The Checkboard Lounge in 1972. Buddy Guy had substantial career success in the late 1980s and 1990. He later signed to Silverstone Records. Guys released popular and award-winning albums like Damn Right, I've Got the Blues (1991), Feels Like Rain (1993) and Slippin' In (1994).

BuddyGuy served as a judge for the 6th and 8th annual Independent Music Awards. He appeared as King of Swing in an episode of Jack’s Big Music Show

Buddy Guy married twice first to Joan Guy in 1959. They have six children; Charlotte, Carlise, Cauline, George, Gregory (who plays blues guitar), and Jeffrey. After their divorce, he married Jennifer Guy in 1975 and had two children Rashawnna(rapper known on stage as Shawnna) and Michael. They divorced in 2002.