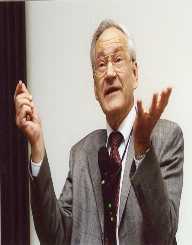 Richard R. Ernst is a Swiss Physical Chemist and 1991 Nobel Prize winner in chemistry. He is remembered for his contributions in expressing frequencies of nuclear magnetic resonance -NMR. He developed an interest in chemistry when he was only 13. He then decided to pursue the subject in his college studies. During his career, he has partnered with other scientists like Weston Anderson.

He has been a great influence in the scientific field. His research has led to the study of the connection between biological molecules and substances such as drugs, water, and metal ions. He came up with many inventions throughout his career. Currently, he still does his research at ETH Zurich.

Richard R. Ernst was born on August 14th, 1933. His place of birth was Winterthur in Switzerland. His father Robert worked at a technical high school in Winterthur. He taught architecture. He has two sisters. Winterthur was a town full of art, especially music. This influenced Ernst’s love for music. As a young boy, he learned to play the violoncello. At the age of 13, he realized his true interest was in chemistry. His first experiments were made possible by his late uncle’s chemicals. His curiosity heightened since that time, and he would read all chemistry books available in the city library.

Richard R. Ernst upon finishing his early education joined ETH Zurich also known as Swiss Federal Institute of Technology situated in Zürich. However, he was quite disappointed with the way his favorite subject chemistry was taught at the time. The teaching involved some facts that were quite hard to memorize not only for the students but also for the teachers.

Richard R. Ernst had to go an extra mile to study on his own since his lessons did not offer him much knowledge. It was then that he came across Glasstone’s book Textbook of Physical Chemistry. The book gave him a deep knowledge of spectroscopy, quantum mechanics, statistical mechanics, and thermodynamics. He attained his diploma in 1957. Ernst was first inducted in the mandatory military service before he took his Ph.D. studies. Later, he enrolled for his Ph.D. in Physical Chemistry under Hans H. Günthard and completed in 1962.

In 1963, Richard R. Ernst worked in the Varian Corporation in Palo Alto located in California. Here he worked along with Weston Anderson as a Research Chemist. In 1966 he discovered how NMR techniques sensitivity could be further increased. He made this discovery with his associate Anderson. This discovery opened doors to the analysis of other materials as well. During his career at Varian Corporation, they came up with Computer applications that aided in automated tests and faster processing of data.

Richard R. Ernst left Varian Corporation in1968 and joined ETH as a faculty member. He led the research at NMR and later came to be a full-time professor in 1976. His research has also formed the basis for the development of Magnetic Resonance Imaging-MRI. MRI is currently among the best diagnostic devices in the field of medicine in the world.

In 1991 he was honored with Nobel Prize for his contributions in Chemistry. During that year he also shared the Louisa Gross Horwitz Prize from Columbia University with Kurt Wüthrich.

Richard R. Ernst tied the knot with Magdalena Kielholz in 1963. Together they have three children namely:  Anna Magdalena, Katharina Elisabeth, and Hans-Martin.