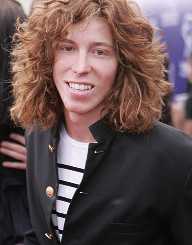 American professional snowboarder Shaun White was born on the 3 September 1986 in San Diego, California. His parents are Cathy and Roger White, and he has two siblings, Jesse and Karie. His father was a surfer, and his maternal grandparents were both roller derby stars. As a child Shaun White and his siblings surfed and skateboarded. In winter, they skied at Big Bear a few hours drive from their home. At age six, his mother introduced him to snowboarding. All three children were keen snowboarders, and the family began entering them into snowboarding meets.

White won his first snowboarding contest when Shaun White was seven years of age. By the time he was nine years old, he was starting to become noticed in the snowboarding as well as the skateboarding world. When Tom Hawk saw him in action, he began to predict that White would do well with snowboarding. Hawk's comments gave rise to White’s nickname: the Future Boy.

When he was a little older, Shaun White took part in MTV’s Sports & Music Festival, and he also joined the Gigantic Skatepark Tour run by Tom Gawk.

Snowboarding was a fairly new sport, and by the age of twelve, he was winning most amateur meets he entered. When he was thirteen years old, he turned professional. Snowboarding was recognized as a sport at the Winter Games in Nagano in 1998.

During his first year as a professional Shaun White won a few top ten finishes but was still treated as a youngster. Then in his second season, he was the runner-up in several events, and other competitors began to take him seriously.

In 2000 Shaun White participated in his first X Games. The following year, at age 14, Shaun White took part in an event in Salt Lake City and was runner-up in the Half-pipe. He was hoping to make the American snowboarding team at the Winter Olympics in Salt Lake city but missed qualifying for the team by 0.3 points. The following year he did well in the X Games (2003) and was named the best athlete after winning both the Slopestyle the Superpipe events. A month later he won the U.S. Open Slopestyle and Superpipe events.

When Shaun White qualified for the Summer X Games in 2003, he became the first summer and winter participant in the history of the X Games. He won his first professional vert title at the Panasonic Open in Louisville (2004), a sixth gold medal at the X Games (2006) and gold at the Winter Olympics in Bardonecchia, Italy (2006). His socred of 46.8 to win gold at the Winter Olympics was the highest in the competition.

In 2006 Transworld named White Snowboarding Rider of the Year. He won gold at the U.S. Open as well as the vert skateboarding event at the X Games in 2007 and the following year he won the U.S. Open Halfpipe title for the third consecutive time.

At the Winter Olympics in Vancouver in 2010, Shaun White won gold in the Halfpipe. His score on the first run was 46.8. He made history at the Winter X Games in Aspen, Colorado when he won a fourth consecutive gold medal. And at the Winter X in 2012, Shaun White scored 100 in the men’s Snowboard Superpipe, becoming the first person to do so in the history of Winter X Games. Shaun White continued winning including his 6th consecutive Superpipe in 2013 which made him the second person to have done so. He won third place in the Pipe and Slope contest at the FIS Snowboard World Cup competition in Colorado that year. He participated in the 2014 Winter Olympics where he finished fourth in the Halfpipe event.

Shaun White’s estimated wealth is in the region of US$40 million made up from career winnings as well as endorsements. Some of the companies he has endorsed products for include: Kraft, Burton, Red Bull, Target, Oakley, and Ubisoft.

Shaun White has a sports video games which he has endorsed. The game is Shaun White Snowboarding and was developed by Ubisoft Montreal and was released in 2008.