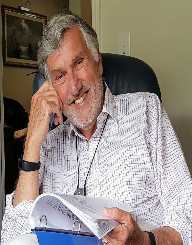 His parents were well-known hoteliers, and Kerr spent a lot of time with chefs as he grew up around his parent’s businesses.

In 1949, at the age of 15, Graham Kerr was given the position of Trainee Manager at a hotel in East Sussex. He then became General Manager of the Royal Ascot Hotel. In 1958, he relocated to New Zealand. He was Chief Catering Adviser for the Air Force, before moving into television in 1959.

He was given his show, Entertaining with Kerr, which was followed by a cookbook of the same name. It became an instant best-seller. Kerr was then introduced to an Australian talent agent, Harry M. Miller, and Miller then launched Kerr in Australia. Before long, Miller had Kerr signed up to Channel 10, where he hosted a cooking show.

The success of the cooking show led Graham Kerr to become a regular face in the media, with guest appearances on radio and television, and writing for magazines. Miller also lined up some very successful endorsement deals for Kerr.

Towards the end of the 1960s, Kerr was offered a deal with a television company in America. Miller and Kerr negotiated an end to their contract, and they separated amicably. They stayed good friends over the years.

Kerr moved to Canada, where he began filming The Galloping Gourmet in 1969. The show ran until 1971 and was a huge success. Kerr became a household face around the world. In 1975, he was given a five-minute daily show called, Take Kerr.

His wife Treena was very ill, having a stroke and then a heart attack in 1986. Kerr formulated a new type of cooking, nicknamed, Minimax. He was soon back on television with a new show, the Graham Kerr Show. The show was syndicated from 1990 to 1995.

Graham Kerr released more cookbooks, followed by yet more television shows. He did a television special with Julia Child and was also an editor for the magazine, Cooking Light.

Between 1963 and 2015, Kerr published 23 books, including his autobiography in 2015, Flash of Silver…the Leap that Changed my World. Some of his other works include The Complete Galloping Gourmet Cookbook (1972), and Graham Kerr’s Minimax Cookbook (1993).

There were another seven books published by Fremantle International, based on his show, The Galloping Gourmet.

Among his awards and honors, Graham Kerr has the following:

1965:   Awarded the Gold Medal at the Culinary Olympics held in Germany

2003:   Awarded an Honorary Life membership of the American Dietetic Association

In 1955, Graham Kerr married an actress named Treena Van Doorne. The couple had three children, and they were still together at the time of Van Doorne’s death in 2015.