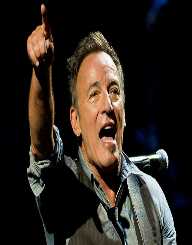 Bruce Springsteen is a renowned American rock singer, guitarist, recording artists and prolific songwriter. He is best vest known for his songs chronicle Springsteen’s working classic roots and his work with the band E-street. His songs are particularly unique, encompassing a sense of passion opinions and stories in them. This is one of the reasons for their popularity and enabled him to gain a lot of fans.

Bruce Springsteen is an optimistic thinker and often portrays the life of a normal American, with realizing stories of the normal day to day life. His bestselling album is `Born in the USA’ is regarded as one of the top albums in the rock and roll sector, and consists of his greatest hit song.  Bruce has received great admiration and respect from American audiences due to his music.

Bruce Frederick Joseph Springsteen was born on 23rd September 1949 in Long Branch New Jersey. He was raised in Freehold Borough, where he spent his early childhood days, more specifically, South Street. He was the son of Douglas Fredrick Springsteen and mother Adele Ann. His father Douglas worked as a bus driver for a period while his mother was a legal secretary. Ann had a more stable job compared to Douglas and was the family’s main breadwinner.

His father was of a Dutch and Irish origin while his mother was of an Italian ancestry. The family consisted of two of his other siblings, named Virginia and Pamela. Pamela worked as a photographer and in the film industry briefly

Bruce Springsteen attained his high school education at Freehold Borough High school. More so, he was brought up in Roman Catholic ways, which was in accordance to the family religious views. Due to this, he went to St Rose of Lima Catholic School. Contrary to his family views and upbringings, Bruce Springsteen did not confer with the Catholic teachings at the time. However, the Catholic upbringing Cleary had the greatest impact on his musical works; thanks to an interview in 2012 whereby he confessed this.

He later joined public Freehold high school. At this age, Bruce Springsteen had already portrayed interest in music. He was inspired by the likes of Elvis Presley who featured on the Ed Sullivan show. His mother had noticed his passion and talents, and bought him a guitar worth about $18. He was allegedly secluding himself to playing his guitar while in school, and found this more interesting than his education. Bruce later joined Ocean county college but did not complete his studies there. He dropped out shortly.

The starting point in Bruce’s career was in 1956 whereby he was inspired by Elvis Presley on the Ed Sullivan show, and his mother spiced this all up by buying him a guitar in 1964, and another one the following year. Bruce Springsteen started out with a local band named the Rouges, whereby they played at local venues. He soon became one of the lead singers of `The Castles.’  In the sixties, he performed in clubs in New Jersey, together with a group called Earth. At this time, he was in charge of collecting the band's dues and shared it amongst them, which earned him the nickname `the boss.’  Also, he had performances with a team called Steel Mill, at a period ranging between 1969 and 1971. He portrayed a unique and original musical and lyrical approach that earned him recognition and praise to many, among them critic Philip Elwood.

In May 1972, Bruce Springsteen was spotted by Columbia Records scout John Hammond who auditioned for him and was signed by Clive Davis. As he rose to international levels, he still frequently paid tribute to his native state of New Jersey in his shows. His debut album came by in January 1973 and was named `Greetings from Asbury Park, N J. It had positive reviews but did not enjoy great sales. In September 1973, he released his second album, called `The wild, the innocent and the E street shuffle.’ Just like the first, it did not enjoy commercial success. However Springsteen’s potential had been recognized by many, and they could make hardy dispute that he had a bright future in this.

In 1975, he released his third album named `Born to run.’ This was a breakthrough album and steered him to fame, and hit number three on the Billboard charts. Due to this, Bruce Springsteen appeared on the covers of various magazines, for example, Newsweek and Time magazine, which was a great achievement for a man of his caliber and stature.  In 1977, his musical career was pretty wasted for almost the whole year. This was because of a lawsuit between him and Mike Appeal, his former manager. Later, he released Album `born in the USA’. This proved one of his major works as it enjoyed great commercial success and seven of its singles were in top 10 in the Billboard charts. The album enjoyed an estimated sale of about 45 million copies in 1984 at that time.

In 1987, Bruce Springsteen released yet another Album which had a quite different style of music. It was a bit slower and reflective. The Album was called `Tunnel of Love.’ He organized a tour to promote it and performed it while at the tour. In 1999, Springsteen got incorporated into `Rock and Roll Hall of Fame.’

Bruce Springsteen has been active in his career although the 2008 and 2009, with shows, tours, and various performances. Quite recently, he has released albums `Wrecking ball’ and High Hopes.’

(b) Golden Globe award for a best original song in 1994 and 2008, for songs `Streets of Philadelphia’ and `the wrestler.’

One of his greatest works is `Born in the USA’ album. It enjoyed massive economic success and is estimated to have more than 184 million copies in terms of sales.

Bruce Springsteen got married to actress Julianne Phillips in 1985, but their relationship did not last, and they divorced in 1989. This is allegedly due to Bruce’s affair with Patti Scialfa. She was one of the backup singers in `E-street band.’ The two got married in 1991 and had three kids together. Apart from his music works, Bruce Springsteen is a kind and generous man. In 2012, when the `Hurricane Sandy’ hit New Jersey, he performed in a couple of shows and dedicated his performances to its victims.