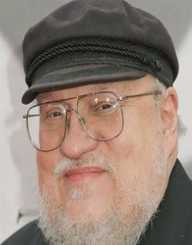 George R.R. Martin is a celebrated American novelist who rose to fame due to his popular action-packed fantasy novel series entitled A Song of Ice and Fire which was later adapted by HBO as Game of Thrones. He was also named by literary critics as the American Tolkien.

George Raymond Richard Martin was previously married to Gale Burnick whom he met at a Science Fiction Convention held at the East Coast. They tied the knot in 1975 but their marriage ended shortly in divorce on 1979. He married a second time to Parris McBride, his long-time partner on February 15, 2011, at their home located in Santa Fe.

Born as George Raymond Martin in Bayonne, New Jersey on September 20, 1948, George R.R. Martin was the eldest of three siblings and has two younger sisters. His parents were Margaret Brady and Raymond Collins Martin. He later adapted the name Richard when he was 13 years old. As a child, he was an avid reader and began writing stories and selling them for extra money to other children.

He attended Mary Jane Donohoe School for his primary schooling and upgraded to Marist High School upon graduation.  He is as an alumnus of Illinois’ Northwestern University’s Medill School of Journalism of which he attained a degree in journalism on 1971. He was also drafted to render service at the Vietnam War to which he strongly objected and applied for a conscientious objector. He obtained the status that allowed him to provide alternative service work for two years starting from 1972 to 1974.

At the age of 21, George R.R. Martin began selling his fictional stories in 1970, and his first sale was to Galaxy magazine. The story which was entitled The Hero was published the following year in 1971 and was even a nominee for the Hugo Award. Martin’s first novel, Dying of the Light, was published in 1977 and was warmly received by a great many.

Despite becoming a regular writer and publishing a number of novels and short stories, George R.R. Martin's breakout success came in 1996 when he released the first installation of the fantasy-themed series entitled Game of Thrones.

It was initially meant to comprise of three volumes, but it grew to seven volumes to date. Game of Thrones was followed by the second book in 1998 called A Clash of Kings then two years later A Storm of Swords was published in 2000. The fourth book came a bit later in 2005 entitled A Feast of Crows which was hailed the top rank on the bestseller list of The Wall Street Journal and was also a New York Times No. 1 Best Seller. The fifth book, entitled A Dance With Dragons, was released in July 2011 and was also a sensational hit. Two other books were announced to follow namely The Winds of Winter, and the finale called A Dream in Spring.

The series attained even more international acclaim when HBO purchased the TV rights for the series and later adapted it into a TV series entitled Game of Thrones. It was nominated for a number of awards and even won multiple Emmy Awards. The series first aired in 2011 and comprised of 10 episodes per season except for Season 7 which consisted of 7 episodes. The final season was set to air in 2019.

To support his writing, George R.R. Martin began teaching for a time at Clarke University with the help of George Guthridge, and English professor that he met at a science fiction convention. Also a skilled chess player, he also worked as a tournament director during the weekends at the Continental Chess Association from 1973 to 1976.

Martin and his wife is a supporter of New Mexico’s Wild Spirit Wolf Sanctuary. He launched a campaign for the sanctuary in 2014 to raise funds and offered a donor the chance to have dinner with him and accompany him to the sanctuary.