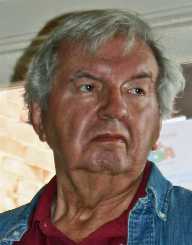 Larry Jeff McMurtry was born on June 3, 1936, in Archer City, Texas, United States, 25 miles from Wichita Falls, Texas. His father William Jefferson McMurtry was a rancher. His mother’s name was Hazel Ruth. In the initial days of his life, he was raised in a ranch in the outskirts of Archer City, Texas. In the evening, all the extended family members assembled on the front porch of the farm and a storytelling session was initiated by the participating family members.

There were no books on the ranch in their possession. Hence, when in 1942, his cousin Robert Hilburn left a box full of 19 books in the ranch on his way to join the ongoing World War II; Larry McMurtry suddenly got an opportunity to read books for the first time in his life. The books were mainly about the standard adventure stories of the 1930s, and he read them over and over again, thereby starting his lifelong saga of love with the world of books.

McMurtry obtained his B.A. degree in 1958 from the University of North Texas and also earned his masters from the Rice University, Houston, Texas in 1960. During the 1960-61 academic year, McMurtry took lessons from the American Novelist Wallace Stegner about the craft of writing fiction at the Stanford University Creative Writing Centre along with many other future acclaimed writers such as Ken Kesey, Gordon Lish, Robert Stone, Peter S. Beagle and Gurney Norman.

In 1961, Larry McMurtry published his first book ‘Horseman, Pass By.’ It is a book about the way of living in the contemporary Texas Ranches. The story was later adapted for the film ‘Hud’ featuring famous actor Paul Newman and actress Patricia Neal, and the movie was released in 1963. McMurtry worked as an instructor at Texas Christian University for a year immediately after leaving the Stanford University, California. He went to Rice University in 1963 and accepted the job of an English lecturer there. He continued the job until 1969. In 1964, he received the 'Guggenheim Fellowship' for his contribution to the cause of developing the literature.

In 1963, Larry McMurtry authored another novel titled 'Leaving Cheyenne' which was also later made into a film named 'Lovin' Molly.' His 1966 novel ‘The Last Picture Show’ was also converted into a movie of the same name in the later years. The movie featured established cinestars Timothy Bottoms and Jeff Bridges in the lead roles. After writing the ‘Last Picture Show,’ he wrote a series of books viz. ‘Texasville’ (1987), ‘Duane’s Depressed’ (1999), ‘When the Light Goes’ (2007), and ‘Rhino Ranch’ (2009).

In 1975, Larry McMurtry wrote another novel 'Terms of Endearment.' The story was adapted for a movie of the same name as his previous works and was released in 1983. From 1968 to 1974 and again from 1978 to 1983, Mcmurtry wrote numerous books, both fiction and nonfiction, like 'All My Friends Are Going To Be Strangers', ‘It's Always We Rambled', 'In A Narrow Grave: Essays on Texas',  'Moving On', ''Somebody's Darling', 'The Desert Rose' and 'Cadillac Jack'.

In 1985, McMurtry’s masterpiece novel 'Lonesome Dove' was published. The story was adapted for a television miniseries and was broadcast in 1989 retaining the original name. In 1987, he came up with a sequel to his ‘The Last Picture Show’ with the publication of his book 'Texasville,' which was also made into a film. During 1989-90, he penned two more books titled 'Some Can Whistle' and 'Buffalo Girls.' Buffalo Girls was made into a T.V. program of the same name. He wrote a script for a T.V. Film titled ‘Montana.’

Larry McMurtry continued to write books in the 1990s and also made them into movies. His 1992 book ‘Evening Star’ and ‘Falling from Grace’ were all made into movies. Continuing with his writing spree, he further wrote the likes of 'Dead Man's Walk,' ‘Comanche Moon,' 'Streets of Laredo,' 'Walter Benjamin at the Dairy Queen: Reflections on Sixty and Beyond' and 'Duane's Depressed.’ He wrote two biographies, 'Pretty Boy Floyd' and 'Crazy Horse: A Life'; the former was based on the life story of infamous gangster Charles Floyd. ‘The Wandering Hill,’ ‘Folly and Glory,’ ‘Sin Killer’ and ‘By Sorrow's River’ are four awe-inspiring novels McMurtry wrote during 2002-2004. He continued his literary journey well into the new millennium and wrote several other books including his 2014 book ‘The Last Kind Words Saloon.’

Larry McMurtry opened two bookstores in Georgetown, Washington D.C. in 1970 and Archer City, Texas in 1988 as he was a passionate book lover. The stores were named ‘Booked Up.’ Both the bookstores are among the largest used bookstores of the United States and had a collection of books ranging between 400000 to 450000 titles. The significant portion of this inventory was auctioned on August 10 and 11, 2012 and was overseen by the Addison & Sarova Auctioneers of Macon, Georgia. Millions of people congregated in the Archer City on the occasion of this historic auction.

Larry McMurtry has received the Jesse H. Jones Award from the Texas Institute of Letters on three occasions: For ‘Horseman, Pass By’ in 1962, For ‘The Last Picture Show’ in 1967 (shared with Tom Pendleton's ‘The Iron Orchard’) and For ‘Lonesome Dove’ in 1986.

He won the 'Amon G. Carter' Award’ in 1966 for his nonfictional work 'Texas: Good Times Gone or Here Again?'

In 1985, Larry McMurtry was awarded the Pulitzer Prize and 'Peggy V. Helmerich Distinguished Author Award' for his book ‘Lonesome Dove.’

In 2006, Larry McMurtry shared both the Academy Award and the Golden Globe Award for the screenplay he jointly wrote with Diana Ossana for the 2005 film ‘Brokeback Mountain.’

Larry McMurtry married Jo Ballard Scott, an English Professor and author of five books, in 1959. He had a son, James with his first wife. They separated after spending around seven years together. On April 29, 2011, McMurtry married Norma Faye Kesey, the widowed wife of his friend and eminent writer Ken Kesey.