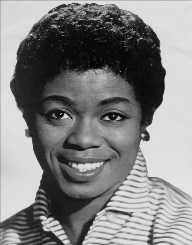 As a child and teenager, Sarah Vaughan already knew that she loved to sing. She often entered singing competitions and talent shows. It was at one of these contests that she was noticed by Billy Eckstine, who was also a singer and bandleader. He asked Vaughan to join his band, and she agreed. It was a great and sudden beginning to her singing career.

Sarah Vaughan performed with Eckstine’s band for about a year. While with the band, she was introduced to a new style of jazz called bee-bop. She went on to use this style of singing even after she left the band. After leaving the band, she began to focus on making a solo career for herself.

Throughout her first decade as a solo artist, Sarah Vaughan worked with several different recording companies, including Remington, Mercury, EmArcy, and MGM. Most of her albums from the 1950’s were released with EmArcy, though. Some of her most famous albums include Hot Jazz, After Hours, Sassy, Swingin’ Easy, and My Kinda Love.

The 1960’s was Vaughan’s most productive decade as a solo artist. Sarah Vaughan produced more albums in this decade than any other. She started out the decade by releasing the album Close to You with Mercury Records.

Sarah Vaughan soon switched recording companies to work with Roulette. With this company, she released Dreamy, The Divine One, After Hours, and several other records. She later returned to Mercury in 1964 and stayed with them for the rest of the decade. She produced the albums The New Scene, Sassy Swings again, and Vaught with Voices with this record company.

Sarah Vaughan released less than a dozen records during the 1970’s-- a sure sign that she was slowing down. She began working with Mainstream in 1971. With this company, she released four albums: A Time in My Life, Sarah Vaughan with Michel Legrand, Feelin’ Good, and Send in the Clowns. After her last album in 1974, she didn’t produce another album until 1977, this time with Pablo Records. She worked with this company for the rest of the decade. Together, the produced several albums, including Copacabana, I Love Brazil!, and How Long Has This Been Going On?

Sarah Vaughan only produced five albums in the 1980’s, with the last of these albums (Brazilian Romance) being released in 1987. Even though that was her last studio album, she continued to perform concerts until 1989. Some of her last albums were Crazy and Mixed Up, and The Planet is Alive... Let it Live!

All of Vaughan’s awards and accomplishments are due to her career in music. Some of her most impressive awards are listed below.

Sarah Vaughan was married four times. She was first married to George Treadwell in 1947. She married her second husband, Clyde Atkins, in 1958. She then married Marshall Fisher in 1971. She married for the last time in 1978, to Waymond Reed. Vaughan also had one adopted daughter, who she adopted as a baby in 1961, named Debra.

Sarah Vaughan died on April 3, 1990, in Hidden Hills, California, USA. Her cause of death was lung cancer. She was 66 years old when she passed away.