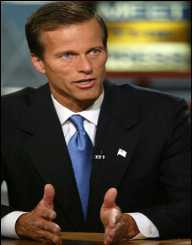 John Thune studied at Biola University where he obtained an undergraduate degree. He also got an MA in business administration from the University of South Dakota (1984).

John Thune moved to Washington D.C. and got a job working for Senator Jim Abdnor. During the Reagan years, Thune worked in the Small Business Administration.

John Thune was elected to the US House of Representatives in 1996 and was reelected twice. In 2002 he lost out when he ran for the US Senate. He ran again in 2004 and won a seat. His defeat of a sitting US Senate party leader was something that had last occurred fifty-two years previously.

Thune was elected unopposed to serve a second term in the U.S. Senate and 2016; he won a third time.

John Thune lives in Sioux Falls, South Dakota. He married Kimberly Weems in 1984. They have two children: Brittany and Larissa. The couple also has two grandchildren.

For recreation, John Thune hunts pheasant, runs and spends time with his family.