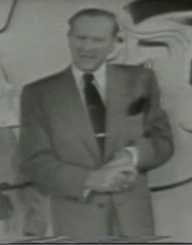 Bud Abbott was an American film, stage, television, and radio actor. Born on October 2, 1897, he was also a comedian and producer. He is best known for the comedy show Abbott and Costello, where he performed as the straight man.

Bud Abbott made a film debut in Night in the Tropics in 1940and continued to appear in both films and television production in his more than a three-decade career. His work in films include In the Navy, Keep ‘Em Flying, Who Done It?, Hit The Ice, Here Come the Co-Eds, Little Giants, Bud Abbott and Costello Meet the Mummy and Dance With Me Henry.

Bud Abbott was born to RAE Fisher and Harry Abbott on October 2, 1897, in Asbury Park, New Jersey. His parents were into the showbiz industry and former workers of the Barnum and Bailey Circus. The family later moved to Brooklyn. Bud Abbott was a school dropout, leaving school to pursue a career.

After dropping out of grammar school, Bud Abbott worked with his father at Dreamland Park on Coney Island on summers. At age 15, he started working as a cabin boy on a Norwegian steamer but later found himself shoving coal.

A career In The Entertainment Industry

Returning to the United States, his father who was then working as an advance man for the Columbia Burlesque Wheel found him a job at the box office of the Casino Theatre in Brooklyn. Working at the burlesque box office for some years, he produced Broadway Flashes, a cut-rate vaudeville tab show in 1923. The show that traveled on the Gus Sun circuit saw him perform as a straight man sometimes. He continued to perform and produce burlesque shows on the Mutual Burlesque Wheel.

The Partnership With Lou Costello

In the 1930’she, while performing and producing the Minsky’s Burlesque show, he came across Costello, a rising comic. The two first worked together in 1935 in a stock burlesque at the Eltinge Theatre. With a great performance, Bud Abbott and Costello formally became partners in the following year. They started performing together in minstrel shows, burlesque, on stage and vaudeville. Bud Abbott and Costello gained prominence and the needed exposure as they performed regularly on the Kate Smith Hour radio show in 1938. The exposure earned them a role in a Broadway musical, The Streets of Paris. They also made a film debut in One Night in the Tropics after signing with Universal in 1940. They out a classic performance in the film despite playing a minor role and that was when coined the abbreviate version of Who’s On First?

Bud Abbott became like “gods,” as their popularity surged and were among the highest paid stars in the world during the World War II. They featured in numerous films and made about 40 films between 1940 and 1956. They earned a percentage of profit with each of the films.

The Abbott And Costello Show

The duo’s popularity came with many other opportunities. They introduced their own radio show, The Abbott and Costello Show, which ran throughout the 1940’s. It was first on NBC from 1942 to 1947 and moved to ABC from 1947 to 1949. They also came up with the live television version of the comedy on The Colgate Comedy Hour and a half-hour series, The Abbott and Costello Show in the 1950’s.

Working together for more about two decades, the relationship between Bud Abbott and Costello hit the rock due to salary issues and rise in egos. On salary, the two started with the format 60% to 40% in favor of Bud Abbott in their burlesques days. The percentage later became 50-50 when they made it to Hollywood and started appearing in films. They soon amended this payment format to 60-40 in favor of Castello. Costello later thought he was the famous of the two so demanded that Universal Studio changed the team name to Costello and Bud Abbott, which the company rejected. This created a rivalry between them coupled with a drop in popularity. The two also came under tax issues with the IRS demanding huge taxes from them. They had to sell most of their properties and rights to their films.

In 1955, Universal Studios also canceled their contract. The duo split in 1957 with Costello dying two years later. Bud Abbott collaborated with Candy Candido in 1960 but later quitted saying, "No one could ever live up to Lou." He lent his voice for the Hanna-Barbera animated series The Abbott and Costello Cartoon Show. Stan Irwin did the voice of Lou Costello.

In1918, Bud Abbott married a burlesque dancer and comedian, Jenny Mae Pratt who performed with the name BettySmith. The two met in Washington D.C. and married until Abbott's death. They adopted two children, Bud Jr. in 1942 and Vickie in 1949. From 1926, he started having a series of epilepsy and in 1964, had some rounds of stroke. He died on April 24, 1974, of cancer at his home in Woodland Hills, Los Angeles. He was 74 years. Abbott’s remains were cremated, and ashes poured into the Pacific Ocean.

Bud Abbott along with Costello is one of the non-baseball personnel celebrated in the Baseball Hall of Fame, and since 1956, a plaque and a gold record of the "Who's On First?" sketch is on display in the Hall. He was inducted into the New Jersey Hall of Fame in 2009.