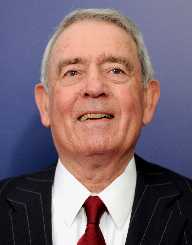 Dan Rather is an American journalist best known for serving as an anchor at CBS News.

Daniel Irvin Rather was born in the county of Wharton, Texas, on October 31, 1931. His father worked in the oil fields. The family soon moved to Houston.

He attended Love Elementary School, Hamilton Middle School, and the John H. Reagan High School. In 1953, he graduated with a degree in journalism from Sam Houston State University. He then enrolled at the South Texas College of Law, but he soon left the school. In 1954, he enlisted in the U. S. Marine Corps. He was soon discharged because he had suffered rheumatic fever when he was a child.

He was the play-by-play radio announcer for the football team of the University of Houston and the Houston Buffs during the minor baseball league.

In 1959, Rather started working on television. He was a reporter for the ABC affiliate in Houston, KTRK-TV. The next year he began working for KHOU-TV, the CBS affiliate of Houston. His live coverage of Hurricane Carla got him noticed by the higher-ups in the network. He got promoted to a correspondent for CBS.

Dan Rather worked for the CBS offices in New York City, Houston, and New Orleans. He covered different events, including the efforts in the Civil Rights Movement. In 1963, he directly witnessed the assassination of President John F. Kennedy in Dallas. He was the first reporter to cover the event. This increased his reputation significantly.

In 1964, CBS gave Dan Rather the position of a correspondent for the White House. The next year, he was transferred to London. While there, he covered events from Europe, Asia, and the Middle East. After that, he spent some time reporting from the battlefield during the Vietnam War.

He soon returned to the United States, and he again became a White House correspondent. He worked during the presidency of Richard Nixon, and he covered the Watergate scandal. After that, he became a correspondent for the documentary series CBS Reports and the investigative show 60 Minutes.

This success gave Rather the opportunity to become an anchor for The CBS Evening News. He started the job in 1981 and continued until 2005. The ratings during these years regularly went up and down. Still, this remained as one of the most popular news programs in the United States.

After retiring from CBS, Rather started working with the AXS TV network. From 2006 to 2013 he hosted and produced the news show Dan Rather Reports. After that, he began hosting the series The Big Interview, which includes interviews with prominent entertainment figures such as Quentin Tarantino and Simon Cowell. He also made short appearances on other news shows.

Dan Rather has won several Emmy Awards and Peabody Awards for his outstanding reporting. He was also inducted into the Television Hall of Fame. On the other hand, he has also received criticism for occasionally having emotional and aggressive outbursts.

Apart from television, Rather has also published numerous books. He has authored a few memoirs together with other journalists, such as the Camera Never Blinks and I Remember.

He has also written about the scandals he has investigated. One of his books is Palace Guard, revolving around the players in the Watergate scandal. In 2012, he released his autobiography, called Rather Outspoken: My Life in the News.

Dan Rather married his wife, Jean Goebel, in 1957. They split their time between Austin, Texas, and New York City. Dan, their son, works as an assistant district attorney in Manhattan. Robin, their daughter, is an environmental activist in Dallas.