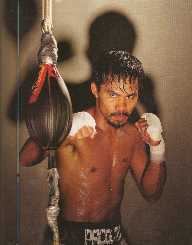 Bobby Pacquiao was born 23 April 1980, to Dionesia and Rosalio Pacquiao. He was born in Kibawe, the Philippines, and has five siblings – Manny, Domingo, Liza, Isidra, and Rogelio.

Bobby Pacquiao’s boxing career began in the United States. In 2005, he defeated Carlos Navarro by a 7th-round knockout, to win the WBC Continental Americas Super Featherweight Title. The following year, he defended his title against Kevin Kelley, who had formerly held the title. In November 2006, Bobby Pacquiao was to defend his title yet again, against Hector Velazquez but was stripped of the title as he was three pounds over the weight limit.

In June 2007, Bobby Pacquiao moved into the lightweight division. He fought Humberto Soto in a 10-round match. In round seven, he was knocked out. He had several more fights in the lightweight division, and in August 2008, he knocked out Decho Bankluaygym in the 8th-round, which gave him the WBO Asia-Pacific Lightweight Title. When he fought again in November, he was beaten by unanimous decision. his fighting career, he fought in 49 fights, for 31 wins, three draws and 15 losses.

In 2013, Bobby Pacquiao entered politics by seeking a seat on the village council of Labangal. His wife, Lorelei, is head of the council. He won his seat and took up the position of Village Councilor of Barangay Labangal. Lorelei was also re-elected to her position of chairman.

When Bobby Pacquiao ran for council, he did it under the banner of the People’s Champ Movement. It is a local party, established by his brother, Manny.

In 2016, he won enough votes to become one of the 12 councilors of General Santos City. The politics is a real family affair.

Bobby Pacquiao's titles in the boxing ring include: