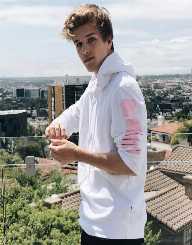 Alex Lange was born on March 3, 2001 in Paris, France to French and South African parents. When he was two years old, he and his family moved to England. He has an older brother Matthieu, who is famous on Instagram. Lange’s best friend is YouTube star AJ Mitchell. He is currently dating musical.ly star Bailee Madison.

Alex Lange began to garner attention via his Instagram account. He began posting various pictures and soon after gained a big follower base. His Instagram account soon became very popular and was noticed by modeling agencies. Alex soon earned several job opportunities, including streaming for ZapStram and modeling jobs with Brandy USA and Subdued. He and a few other young stars teamed up for a project named Team 10.

In 2016, Lange embarked on the CAP Tour, to meet his fans across the United States and Canada. In 2016, he launched his YouTube channel and gained 60 thousand followers in a matter of several days.