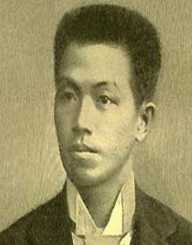 Filipino politician and revolutionary Emilio Aguinaldo was born on the 22 March 1869 in Kawit, Cavite in the Philippines to Carlos and Trinidad Aguinaldo. He was of Chinese Tagalog descent. His father died when he was a child.

Emilio Aguinaldo was a pupil at the Colegio de San Juan de Letran in Manila.

Emilio Aguinaldo became politically aware as a young man, and he became a Freemason in 1895, joining the Pular Lodge. Around this time he was introduced to the revolutionary figure Andres Bonifacio and became a member of his group of revolutionary fighters focused on overthrowing Spanish rule. After Bonifacio’s assassination in 1897, Emilio Aguinaldo became the head of the revolutionary group. After he was exiled to Hong Kong, he returned in 1898 and on the 12 June 1998 declared independence from Spain. In 1899, he became the first president of the Philippines.

The United States did not accept the legality of Emilio Aguinaldo's government, and consequently, war broke out between the two countries. The subsequent guerrilla war lasted three years before he was captured which brought an end to the war when he swore an oath to the United States in return for a limited form of independence. He ran for the office of President of the Philippines in 1935 but was beaten by Manuel Quezon. In 1946, the Philippines became an independent republic.

Emilio Aguinaldo was married to Hilaria del Rosario de Aguinaldo from 1896 until 1921. Later, in 1930, he married Maria Agoncillo.