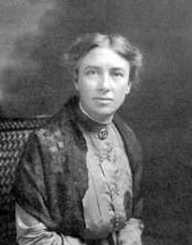 Edith Dircksey Cowan was born on August 2, 1861, in Geraldton, Australia. Her parents were Mary Eliza Dircksey and Kenneth Brown. She also had three siblings: Blanche, Clarence, and Forrest. Sadly, her mother died in childbirth when Edith Dircksey Cowan was only seven years old. Kenneth felt as though he could not take care of his children alone, so Edith was sent to boarding school. Sometime later, Kenneth remarried to a woman named Mary Ann Tindal. She had two children from a previous married, Amy and Rose, who would be Edith’s step-siblings. However, the new marriage was an unhappy one. Kenneth later murdered Mary Ann. After which, Edith was taken out of boarding school and raised by her maternal grandmother.

Edith Dircksey Cowan  was married in 1979 when she was 18 years old.. It was around this time that she finished her studies and started to become active in her community. Her husband worked as a policeman. He would often tell her stories of what he saw on the job. Knowing what went on in the streets made her worried for the safety of her neighbors, especially the ones who were women and children, as she noticed that these groups were mistreated most often. She vowed to make a stand for these people.

Edith Dircksey Cowan  joined many groups in the 1890’s. She was a part of the St. George’s Reading Circle. This was an all women's group that distributed books and newspapers to those who would otherwise not have access to them. She also joined the Ministering Children’s League, which worked to protect the welfare of children.

In 1893, she joined the House of Mercy. Here, she helped to care for unwed mothers and their children. At the time, being an unwed mother was extremely scandalous, and it was difficult for these women to find help elsewhere.

In 1894, the St. George’s Reading Circle opened a new division in the group, forming a Karrakatta Club. This club worked further to make educational tools more accessible to the poor. The club also fought for women’s suffrage. With the help of Edith and many other women across the country, women earned the right to vote in Australia in 1899. This would later be seen as one of the biggest accomplishments in her life.

Edith Dircksey Cowan  did anything but slow down at the turn of the century. During this decade, her attention was still focused on that of women, mothers, and children. She spoke publically about her beliefs. Some took her ideas to heart, while others thought she was crazy for wanting to help those that much of society still thought per pariahs. Her criticizers did not deter her from her goals. In the early 1900’s, she served on the North Fremantle Board of Education.

In 1906, she joined the Children’s Protection Society (which had been formed that same year). With this group, she helped to get the State Children Act of 1907 passed. At the end of the decade, in 1909, Edith cofounded her own group (with the help of Jane Scot), the Women’s Service Guild.

In 1914, World War I broke out. Edith shifted her attentions to helping with the war front. She helped support the Red Cross, doing whatever she could to get supplies to soldiers in need. She still worked in her many groups during the war, though.

In 1915, she joined the Children’s court (which she would work on until her death). In 1916, with the Women’s Service Guild, she helped to build and found the King Edward Memorial Hospital for Women. This hospital focused on caring for pregnant women and women who had recently had children. Other women were also welcome to be treated here. Also in 1916, Edith Dircksey Cowan  became a freemason and joined two more groups: the Australian Federation of Droit Humain and the Anglican Social Questions Committee.

The 1920’s also proved to be a busy decade for Edith. In 1920, she became the first woman Justice of the Peace. In 1921, a law was passed that allowed women to be in the legislative assembly, so in that same year, she became was elected to do just that. Edith Dircksey Cowan  stepped down as president of the Western Australia's National Council of Women in 1921 and became its vice president instead. Edith Dircksey Cowan  held this job until her death. In 1926, she cofounded the Royal Western Australian Historical Society.

Most everything that Edith Dircksey Cowan  did in her lifetime can be considered an accomplishment. Below is a list of awards and accomplishments that were not already listed above.

Edith Dircksey Cowan was made an Officer of the Order of the British Empire in 1920 for her efforts with the Red Cross during World War I.

In 1923, she helped to pass a law in which women were now able to pursue a career in law.

Edith Dircksey Cowan died on June 9, 1932, in Perth, Australia. She was 71 years old when she passed away.

The Electoral Division of Cowan, made in 1984, is named for her.

The Western Australian College of Advanced Education was renamed Edith Cowan University in 1991.

Several prestigious awards are named for her.