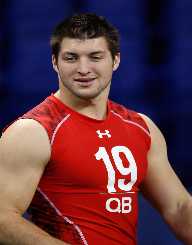 Timothy Richard Tebow best known as Tim Tebow is an American baseball outfielder and former American Football player. He played three seasons in the National Football League before switching to baseball as an outfielder in the New York Mets organisation in 2016. Born on August 14, 1987, he was able to play football in high school after the state of Florida passed a law which allowed home-schooled children to compete in sports at high schools in the locality they lived.

Tim Tebow has since competed in different levels and has won several awards. He won the Heisman Trophy in 2007 as a college football player for the University of Florida and was part of the 2006 and 2008 winning team at the BCS National Championship. Tebow announced his baseball career in 2016 after retiring from football.

Timothy Richard Tebow was born on August 14, 1987, in Manila to Pamela Elaine and Robert Ramsey Tebow II. He is the last of five children to his parents. Tebow was home-schooled but had an opportunity to play in his local high school team due to a law passed in Florida which permitted home-schooled children to compete in high school sporting events. It defined that they could compete in high schools in the district they lived in. With this opportunity, he enrolled at the Trinity Christian Academy which was in his locality in Jacksonville to play football. While there, he played tight end.

Tim Tebow later moved to St Johns County in 2003 which made him eligible to play for Allen D. Nease High School, and he played quarterback for the struggling football team. He was very impressive with his running and throwing abilities as a junior at Nease which gained him national attention. This propelled him to win the Florida Player of the Year despite being unable to play in the whole season due to injury. His senior season with the Nease Panthers was magnificent. He led his team to sweep all state titles gaining him the alias, Florida’s Mr. Football and once again the Florida Player of the Year.

His performance that session gained him a place in the U.S Army All-American Bowl in San Antonio, Texas. The always impressive Tebow never disappointed making him a topic for discussion on Faces of Sports documentary by ESPN titled "Tim Tebow: The Chosen One." The program elaborated on Tebow's homeschool controversy and missionary work in the Philippines, his athletic exploits, and the college recruiting process.

After a successful high school career, Tim Tebow was given an athletic scholarship at the University of Florida to play for Florida Gators football team coached by Urban Meyer from 2006 to 2009. Tebow started his college career as a backup to Chris Leak in the 2006 session. His debut was in a match against South Miss where he came from the bench.

In September that year, Tim Tebow made his debut against the Tennessee Volunteers and played his biggest game LSU Tigers a month later. In that game, he led to all the three touchdowns of Gators with two passing and rushing for another. In the 2007 session, he was named in the starting quarterback and set a personal, school and national records that season. His records included University of Florida single-game quarterback rushing yards, 166, week 4, SEC season rushing touchdown record, 20, Career high single-game rushing touchdowns, 5, November 10 and SEC season total touchdowns (passing and rushing), 55.

Tim Tebow ended that session with a Heisman Trophy for the most outstanding college football player of the year and the Davey O’Brien Award for best quarterback in the nation. In the 2008 session he broke the school record with his 37th rushing touchdowns and led Gators to a 12-1 record and led the team to win the 2008 Sec Championship Game title in a final match against Alabama Crimson Bulldog and led them. He won the Maxwell Award at the end of the season making him the second player to win the award twice.

Tim Tebow had an impressive 2009 session start but unfortunately got injured in a game against Kentucky. During the game, he was hit in the chest by Taylor Wyndham, Kentucky’s defensive end making him fall back to hit his head on the knee of Florida tackle Marcus Gilbert. He lay motionless after the incident and with the help of the sideline he was rushed to the University of Kentucky Chandler Center where he was treated and discharged the following morning. In the 2009 season, he set a new Sec record with his 50th and 51st rushing touchdowns breaking that of former Georgia’s running back Herschel Walker and set a record in Bowl Championship Series game. He graduated from the University of Florida in 2009.

Tim Tebow entered the 2010 NFL Draft after previously passing the 2009 NFL Draft for his senior season in Florida. Before his NFL debut, there were several debates about his potentials, and many expressed negativity about him becoming successful in NFL. Nonetheless, he was picked by Denver Broncos to play in the first round of the 2010 NFL Draft. His number 15 jersey at Broncos was the top-selling jersey in the 2010 season. Tebow signed a 5-year professional contract with abase value of $11.25 million for the Broncos on July 29, 2010.

Tim Tebow's first season was very successful ending up with a record of being the first quarterback in NFL history to rush for a touchdown in each of his first three career starts. He stayed with the team till the end of the 2012 season when he was traded to the New York Jets. His career with Jets was not successful as he suffered two broken ribs making him inactive. He was released on April 29, 2013, and was signed by the New England Patriots on a two-year no guaranteed money contract on June 10, 2013.

His career at New England Patriots was also not encouraging. He further joined the Philadelphia Eagles on April 20, 2015, where he competed with Matt Barkley for the third-string quarterback position. He played four preseason games with no starts. His scores were not impressive, so was released after spending just five months with the team.

After being released by the New England Patriots in 2013, Tim Tebow became inactive and was therefore signed by ESPN as a college football analyst on December 30, 2013. His contract with ESPN granted him to seek opportunities as a player when a chance arrived. On January 31, 2014, he became a co-host of ABC News’ Good Morning America just two days before the start of the Super Bowl XLVIII.

Tim Tebow announced in August 2016 his interest in pursuing a baseball career although the last time he played the baseball fulltime was in 2005 during his junior year in school. He received contracts from independent teams like Schaumburg Boomers of the Frontier League and the Southern Maryland Blue Crabs of the Atlantic League of Professional Baseball and later an offer from a Venezuelan Professional Baseball League team Aguilas del Zulia. He, however, held a tryout at the Dedeaux field in the presence of 40 MLB scouts and members of the media.

Tim Tebow eventually signed with the New York Mets on September 8, 2016, to participate in the Mets’ instructional league. He was later assigned to Scottsdale Scorpion of the Arizona Fall League. In spring, he trained with Mets and played his first game against the Boston Red Sox on March 8, 2017.

Tim Tebow has engaged in several charitable works which started during his years at the University of Florida. He along with other students formed “First and 15” to raise funds for the Uncle Dick Orphanage in the Philippines and also for the Shands Hospital pediatric cancer centre in Gainesville. He set up the Tim Tebow Foundation in January 2010 when he graduated from the University. His foundation and CURE initiated plans to build a children’s hospital in the Philippines in 2011. CURE and the Tebow Foundation will fund the project, which cost $3 million.